AN ANIMATED CHRISTMAS FOR TERRY! 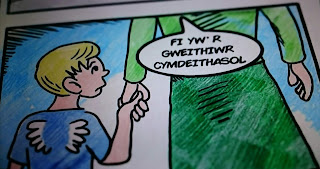 In February this year our very own Terry Cooper was asked to produce drawings for S4C's Christmas film, Pluen Eira.

Every year, S4C make a seasonal film, and this year the story was about a young child who is placed with a new foster family.

Frank's only joy is his comic collection, and when he's taken to spend Christmas on a remote farm, he's annoyed to discover that his comics haven't been packed. Bethan, a young girl who lives at the farm, gives him some pencils and paper, and he begins to draw the adventures of a superhero called 'Pluen Eira' (Snow feather) – based on his life and inspired by a white turkey on the farm.

Through the film, Frank's fertile imagination and drawings are shown coming to life via animated sequences. For this, Terry was briefed to draw Frank's thoughts and ideas – but in a simpler style befitting that of an eleven-year-old.

Terry said: "While the live action filming was happening, I produced a large number of drawings, broken into separate parts for the ease of animation, and also a comic book that Frank has printed out in the film. It was a very intensive few weeks, drawing through the night until daybreak, then picking up the next day's notes and brief in the morning to begin again. The film had some preview screenings in December, and was well received. It was aired on S4C on Christmas day at 6:30pm, in Welsh with English subtitles. I found it an interesting and fun job, and it really pushed me in terms of adopting a different style and providing the animation team with digitally drawn images that had the appearance of coloured pencils. I haven't seen it yet, but look forward to seeing my artwork come to life via animation."

We are very pleased for Terry at Candy Jar. He has been with us from the beginning and deserves this continuing success. Who knows what 2019 will bring?
Posted by Candy Jar Films at 00:12