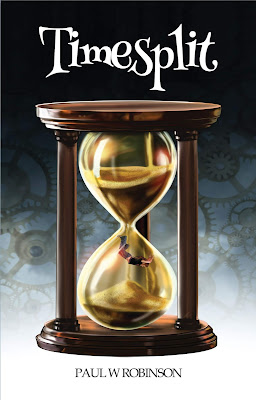 Mary Edith Pechey and Marie Curie were two of the most influential women of their times. Marie Curie conducted significant research on radioactivity as well as being the only person to win a Nobel prize in two different sciences. Edith Pechey was one of the first female doctors in the United Kingdom and a promoter of women’s rights. Both women were contrapuntal to the development of the human race, but what would happen if their lives were thrown off track?

Paul Robinson takes a small hiatus from his Charlie Holmes series to write Time Split, a new novel following the adventures of Jenny Johnson. Jenny finds herself launched into the bodies of two teenage girls in the past. She must ensure that they are set back onto the correct paths to secure their future influences, and the success of humanity!

Inspired by a writing exercise, Paul created Time Split after receiving the prompt “One day she woke up…”. He combined this with his expansive knowledge of famous women throughout history -– of which he has a list -– in order to raise more awareness of their achievements.

Paul explains: “I am a strong believer in writing about important female characters. I want to readdress the balance between the genders while teaching younger girls about amazing, influential women.”

Having taught young people for the past 40 years, including working with those hard of hearing, Paul’s main aspiration is to develop new role models in order to inspire his students. He aims to create more relatable and exceptional characters; Charlie Holmes is based on one of his deaf students, Charlotte.

Time Split encapsulates adolescence in a realistic way, with a generous serving of miscommunication, humour, love and heartbreak.

If you like to publish a YA or children's book with us and take control visit: www.jellybeanselfpublishing.co.uk
Posted by Candy Jar Films at 10:44 No comments:

INSPIRATION BEHIND THE OSCAR BOOKS


Hope and friendship can be found in the worst of situations. Things don’t always go to plan. Sometimes things go wrong. Sometimes we get lost and we can’t find our way back. Often this leads to unexpected meetings, friends, adventures, and a brand new life.

The wonderful children’s book Oscar the Ferry Cat written by the talented Molly Arbuthnott, is heart-warming picture book that explores how we come to terms with loss and the positives that can be gained from this. 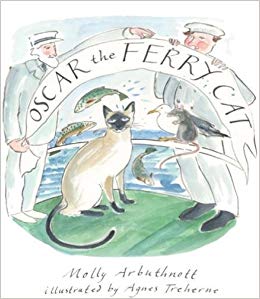 Loss is an unpleasant part of life that people don’t want to talk about, especially with children. As a primary school teacher, Molly Arbuthnott feels this is a missed opportunity. Loss is inevitable, we will all experience it.

But how we cope with it will make a difference to how it will shape the rest of our lives. She says: “I wanted my pupils to be able to read something that would help them understand the realities of life. And to teach them that hope, love, belonging, and friendship can always be found.” Her books achieve this in a masterful and light-hearted way that makes it very easy for children to understand.

Oscar is a Siamese cat with an adventurous streak. When he runs away from his family to explore, he loses his way and realises that he may never be able to get back. Although upset, he tries to make a new life for himself and meets lots of fantastic and interesting characters along the way. In the next part of Oscar’s tale, he and his new found friends explore the beautiful Hebrides and find themselves risking everything when they notice a girl in danger on a beach.

This daring book series challenges the concept of the ‘happy ending’ with a rewarding outcome. Molly Arbuthnott teaches children and adults alike that life takes some unexpected twists and turns. You may not end up where you wanted, but you will always find your way. Her exploration of loss is a beautifully crafted piece of work full of emotion, inspiration and hope.

Molly has written and published three Oscar books so far through Jelly Bean Books. These are Oscar the Ferry Cat, Oscar the Hebridean Cat and Oscar the London Cat. Molly Arbuthnott is currently working on her next book, the anticipated Angus the Robin, which will prove to have just as much depth, insight and meaning.

If you like to publish a picture book with us and take control visit: www.jellybeanselfpublishing.co.uk
Posted by Candy Jar Films at 12:00 No comments:

THE BEES KNEES! PASS THE KLEENEX! 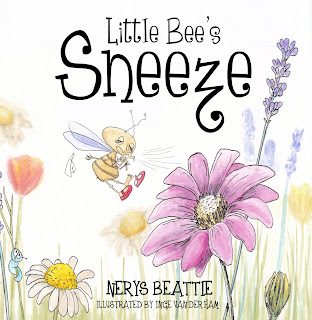 As of 2019 bees are currently at a higher risk of extinction than ever before. Pesticides appear to be the main culprit for this growing issue and with her new book Little Bee’s Sneeze Nerys Beattie hopes to send an important message to children and adults alike.

Nerys has taken time away from her three-year-old son, husband and small pack of dogs, to write and create her first ever short children’s fiction book. It follows the journey of a small bee with terrifyingly allergies to flowers. This means she cannot take part in day-to-day bee life, subsequently isolating her from the rest of the hive.

Having always wanted to write, but never having had the time before, Nerys was finally emboldened to start her labour of love after deciding to prioritise the idea she had been holding onto for as long as she can remember. She says: “Once I had thirty minutes to myself and I sat down at my desk, all of the ideas came spilling out. I started at 1pm and by 8pm I had written the entire book!”

Her first venture into children’s fiction is a real treat, shining light upon the trials and tribulations children may face, up against the backdrop of a walking, talking bee hive. Having always suffered from hay fever herself, Nerys wanted to incorporate this into her story. She also tackles issues such as bullying, running away from home and feeling excluded.

Nerys continues: “I wanted to include issues that were integral for parents to talk about with their children, but can often be tricky to handle. This book will hopefully help start the conversation. I also wanted to include bee poison as a representation of the pesticides that are killing bee communities, however, it needed to remain subtle and flow well within the storyline.”

Her collaborator on this project has been Inge Van Der Ham. Inge is a fellow colleague from over twenty years ago who reconnected with Nerys after the author posted her elation at finishing Little Bee’s Sneeze. Inge reached out and offered her skills as the illustrator for the book, and the pair then began to work alongside to bring the story to life.

Little Bee’s Sneeze is an adorable short rhyming story that shows children how our differences make us special. Nerys Beattie invites us to follow the story of a small bee who, by realising her potential, can achieve miraculous things. It is the perfect read for your children during this run up to Christmas.

If you like to publish a picture book with us and take control visit: www.jellybeanselfpublishing.co.uk
Posted by Candy Jar Films at 09:00 No comments:

HOME SWEET HOME? OR MAYBE NOT... 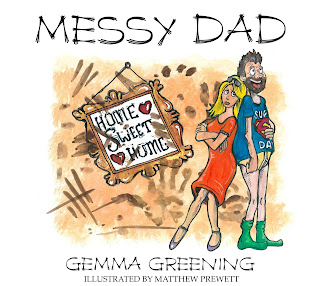 Gemma Greening never had plans to become a published author. It wasn’t until a string of funny poems she had scribbled over birthday cards to her husband; mainly for the amusement of her two sons, Alfie and Oliver, snowballed into an idea for a children’s fiction book, and all of a sudden ‘Messy Dad’ was born.

Having always had a way with words; often writing short poems when she found the time, Gemma struck gold when she started stringing together silly and satirical rhymes about her frustration with her partner Ben’s lack of initiative when it came to housework.

Gemma says: “It all started as a joke to be honest. My eldest, Alfie, really likes getting involved. After showing the ideas of Messy Dad to some close friends, I gained the confidence, but I needed to decide to share it with an audience.”

Messy Dad is a cheeky and brassy short rhyming story, with silly anecdotes. Illustrator Matt Prewett successfully heaps on the comedy, matching each verse to an equally wacky cartoon, tying the book together as dessert for your eyes. The story follows our leading man Messy Dad who happens to have some rather questionable hygiene habits and struggles to hold down the fort whilst his wife is at work.

Gemma continues: “Having such a close bundle of kids in my life; with my three nephews, two nieces and of course my own two boys, I became inspired to create something that they could read and enjoy whilst at the same time pushing me out of my comfort zone. Although the idea came from a real life scenario, I was experiencing with my partner, he knows it’s quite exaggerated and has been really supportive throughout the process.”

Gemma is already working on new material that continues to shine light on her lovable, funny family and hopes to have two new Messy Dad books out next year. Messy Dad will surely face challenges far trickier than just juggling the kids and the broken dishwasher. Will he succeed and become ‘Super Dad’ full-time, or will ‘Messy Dad’ prevail?

If you like to publish a picture book with us and take control visit www.jellybeanselfpublishing.co.uk

Posted by Candy Jar Films at 15:10 No comments: 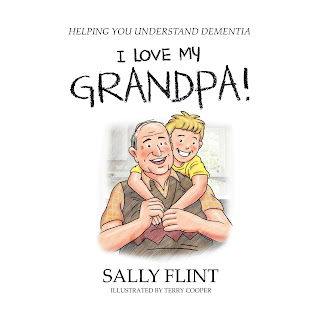 We need to talk about Dementia! The illness has long been misunderstood and stigmatised. Despite millions of people being diagnosed or impacted by it every year we do not talk about it.

Enter Sally Flint. In her children’s picture book I Love My Grandpa!, Sally has approached the subject of dementia in a heart-warming and educational way. She aims to eliminate the stigma of the illness. She says: “There is still a lot about dementia that people don’t understand. We need to talk about it. Dementia is not as simple as forgetfulness.”

In the book, Sally’s explores how dementia affects all those involved, most particularly children. Her beautifully illustrated and poignantly written story tackles this issue with sensitivity, intelligence and love.

She continues: “When a family member is diagnosed with a type of dementia, such as Alzheimer’s or Lewey Body, the change to normal family life can be overwhelming. My story is about a boy, Chris and his grandpa. Despite Grandpa's dementia they have a loving relationship. The story explores the coping mechanisms of dementia, while being entertaining, uncomplicated and thoughtful.” 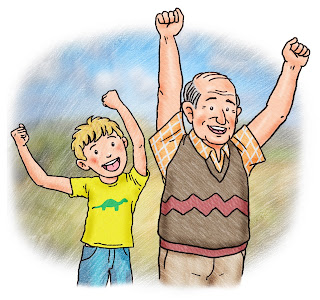 The book has been published by Jelly Bean Books. Head of Publishing, Shaun Russell, says: “I Love My Grandpa! has gorgeous illustrations by artist Terry Cooper. Alongside the sympathetic text by Sally Flint, it is humorous and offers a fresh perspective on the illness. You don’t need to have experienced dementia to read the book. Its overriding message is that family is important and love will conquer.”

I Love My Grandpa! is a sincere, insightful, and uplifting story that everyone needs to read. The message is clear! Those diagnosed with dementia are still human and have so much to offer.
To order the book click https://www.sallyflint.com/shop.html

Posted by Candy Jar Films at 11:49 No comments: