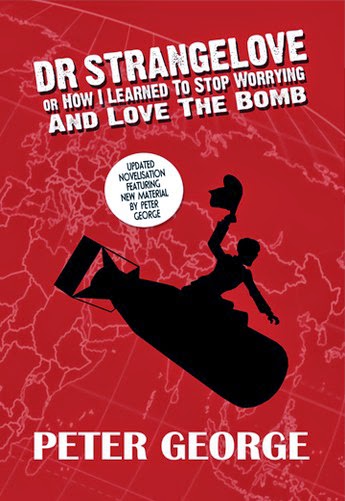 On the fiftieth anniversary of the film’s release, and to mark what would have been its author’s ninetieth year, Candy Jar Books is re-issuing the official novelisation of Stanley Kubrick’s classic Dr Strangelove or: How I Learned to Stop Worrying and Love the Bomb.

Preserved by the US National Film Registry in recognition of its cultural importance, rated by the American Film Institute as the third funniest movie ever made, provocative, thought-provoking and laugh-out-loud hilarious, Dr Strangelove is a cinematic landmark.

Included in this new edition is a never-before-published short by Peter George about Strangelove’s early career. Offering an insight into the character’s background, and slyly alluding to the real-life figures which inspired the creation of him; this ‘exclusive’ new content is a fascinating addition to the Strangelove legend.

Despite its status as a comedy classic, Dr Strangelove… was inspired by a far more downbeat source: Peter George’s novel Two Hours to Doom (Red Alert in the USA). A solemn look at the madness of Mutually Assured Destruction, Two Hours… was considered so chillingly accurate that it was used as a tactical training document on both sides of the Atlantic.

Kubrick was so impressed with the novel that not only did he buy its film rights, but he asked George to adapt it for the screen. George, alongside Kubrick and Terry Southern, was Oscar nominated for his work in doing so, a process which had transformed his grave forewarning of nuclear Armageddon into the raucous and biting satire that we know today. George was the natural choice for the novelisation which he started before the film was completed.

Much of what is iconic and influential about the movie originates in Two Hours… The real-life hotline which connects the US president to his Russian counterpart was installed in response to anxious readers of the book; meanwhile, the code ‘CRM-114’, which Kubrick enthusiasts diligently search for across his films, is first to be found in George’s Two Hours to Doom.

And George once again pushed his story into unexplored territory, developing many scenes that were not included in the final cut of the film, and fleshing out the narrative.

Sadly, he took his own life in June 1966, just a year after his Oscar nomination, for reasons that haven’t yet been understood but will be explored in the publication of his biography.

Candy Jar Books is an independent, Cardiff-based publisher, and was approached with George’s work by his son, having previously commissioned a biography of the late author. Dr Strangelove…, the official novelisation, is the first in a series of re-issues that will ultimately see the entirety of Peter George’s back catalogue in print.

With a Blu-ray set of Kubrick’s work, the Masterpiece Collection, also being released this year, the time is right for an important part of the Strangelove story to once more be made available. Head of Publishing for Candy Jar Books Shaun Russell said, ‘We are delighted to be publishing such an influential and ground-breaking story. Dr Strangelove… is part of the fabric of our culture, and to be able to share the novelisation with the world, particularly in such a landmark year, is a privilege.’

Dr Strangelove or: How I Learned to Stop Worrying and Love the Bomb is published by Candy Jar Books and is available in paperback from December 2014. Pre-order now!