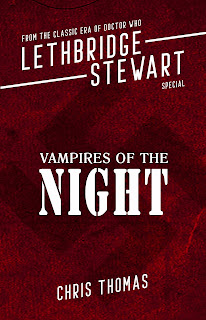 On Sunday, Candy Jar gave away preview excerpts of the long-awaited sequel to the Reeltime straight-to-video Doctor Who drama, Downtime.

On Christmas Eve, it was the turn of Lethbridge-Stewart’s granddaughter, Lucy Wilson. Written by Tim Gambrell (author of the upcoming Laughing Gnome book, Lucy Wilson and the Bledoe Cadets) and Chris Lynch (author of the second Lucy Wilson novel, Curse of the Mirror Clowns) this one hundred page Christmas novel features malevolent Christmas crackers, and a timey-wimey anecdote inspired by Charles Dickens’ A Christmas Carol.

Tim Gambrell has been following the advent calendar and is excited to be included within its line-up. He said: “Shaun outlined his requirements in two words: Christmas crackers. Bang! The spark ignited and the whole thing came together very organically. Christmas is a time that focuses a lot on family, and I knew from the off that I wanted plenty of family character ‘moments’ in the story, leaving the threat to lurk in the background until its moment arose. Just be careful when you pull your crackers after lunch on Christmas Day!”

Chris Lynch is also thrilled that fans of Lucy Wilson can enjoy his take on her adventures during the Christmas holidays. He said: “Writing for Candy Jar this year has been an amazing experience. I can't think of a better way to see out my writing year than sitting in the shadow of my Christmas tree, sending Lucy and Hobo out into the universe once more.”

Christmas Day saw the biggest giveaway yet, with the complete three hundred and forty pages of the Doctor Who non-fiction book Companions: Fifty Years of Doctor Who Assistants written by Lethbridge-Stewart range editor, Andy Frankham-Allen.

Andy said: “When Shaun told me that Candy Jar would be giving away something every day for twenty-five days I thought he was mad. I said, “You’ll regret it by day seventeen”, and indeed he did. However, I do feel that he has pulled it off, just! To be honest, I have actually enjoyed many of the freebies, particularly the Eileen Younghusband documentary. So, I am really pleased that he has chosen Companions as the Christmas Day giveaway. It deserves to be out there again. For six months I watched every episode of Doctor Who, and the book, in my opinion, encapsulates what is great to be the Doctor’s best friend. And Christmas is certainly a good time to celebrate this.” 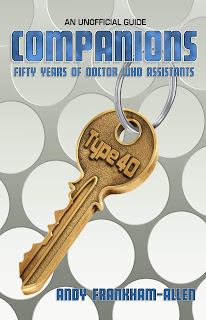 Since December 1st Candy Jar’s freebies have included The Xmas Files, the first chapter of God Bless Hooky Street: A Celebration of Only Fools and Horses, A Very Private Haunting, The New Unusual & The Man from Yesterday on Kindle, Lethbridge-Stewart-inspired Spotify lists, the complete Kangazang!: Remote Possibilties audio drama (read by Colin Baker), plus a variety of Lethbridge-Stewart short stories.

Keren Williams, who has recently been promoted to publishing coordinator at Candy Jar, explained the thinking behind the advent calendar: “It’s a Christmas tradition that we give away some short stories to our loyal readers, and this year I thought why don’t we go the whole hog and really spoil everybody? I feel that, despite Andy’s reservations, the giveaways have been successful. I have certainly received many emails from readers who have been looking forward to each day. Perhaps this is something we might repeat in the future. Time can only tell.”

Visit to http://www.candy-jar.co.uk/books/adventcalendar.html to see all the giveaways.