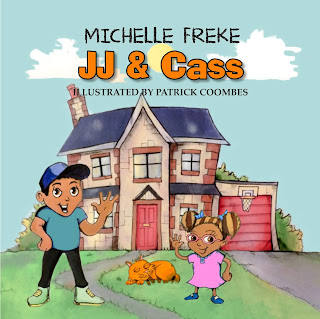 What will life look like for our children after Brexit? Is intolerance becoming a norm in today’s society? A Cardiff-based writer feels that that the time is right for the public to engage in this conversation. She has written a picture book to highlight these issues.

Author and mum Michelle Freke believes that ordinary families should encourage young people to embrace differences. She says: “In recent times the media has highlighted growing intolerance in our society. Take for instance the recent Windrush scandal, or the rising rates of racial harassment. Our kids pick up on this atmosphere. We cannot rely solely on schools to instil tolerance in our children. Equality and tolerance must start in the home during a child’s formative years.”

Accordingly, drawing on her BA in Early Years Education and her experience writing five previous books, Michelle came up with JJ and Cass, a heart-warming children’s picture book starring her own children. JJ and Cass are two mixed-race siblings, opposite genders and with ten years between them. But despite their differences, they really have so much in common. Michelle believes that it is important to embrace our differences, so our similarities will shine through.

Michelle continues: “I thought my children would be nothing alike. One would be at tots’ group while the other was in the cinema. I would have parent teacher consultation and baby vaccinations within the same hour. But as the little one grew, I began to notice occasions when she would do something just like her brother at that age. I thought that this just went to show: even as we grow into individuals, there’s still so much we have in common, that binds us together.”

So, as the United Kingdom moves away from Europe, Michelle hopes that books such as hers will reaffirm a common belief in tolerance. In writing JJ and Cass, Michelle also remembered her cousins when they were children. She says: “They were two little boys. One would always belittle the other for liking 'girly' things, whereas he liked rugby. I realised that there were so many ways that societal intolerance registers in our children’s behaviour. I knew then that I wouldn’t be alone in striving to teach my children that difference isn’t wrong, or frightening, or weird – difference is beautiful.”

Proud of her Welsh heritage, Michelle is publishing her book through Cardiff-based Jelly Bean Self-Publishing, an imprint of Candy Jar Books. As JJ and Cass becomes available in various bookstores in south Wales this summer, she will take her story on the road, with a promotional tour across the UK.

Candy Jar’s head of publishing, Shaun Russell, endorses Michelle’s endeavours: “We like to think of ourselves as a conscientious publisher, reflecting the good that books can do for people, as well as society as a whole. We think Michelle’s message is a very timely one, and we’re proud to have her self-publishing with us.”

Featuring full-page illustrations by Patrick Coombes, JJ and Cass is sure to enthral and entertain its young readers, even as it educates them. It is destined to become a go to resource for parents across the country.