KEEP CALM AND CARRY ON: LOCAL WRITER LOOKS TO PAST FOR DEBUT NOVEL 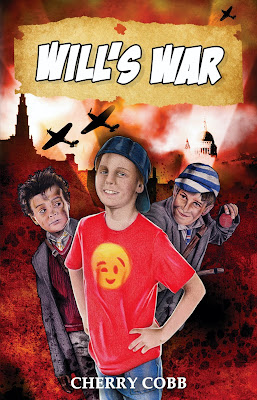 Somerset-based poet Cherry Cobb shows off her wild and vivid imagination with the release of her debut children’s novel.

As a former lecturer, Cherry appreciates the importance of children’s literature, and is very aware of the vitality of the topic of World War II in schools across the country. She said: “The idea for Will’s War came to me after I visited a ghost village, which was evacuated in 1943. The trip got me comparing life now to what it must have been like back then. As a major topic in schools, I decided to write a story containing these time periods to help children gain a larger understanding on the subject.”

Will’s War shows life from the perspective of eleven-year-old Will during the twenty-first century. The book addresses life for a child in a single parent family, and the emotional devastation that occurs when a parent decides to leave. The story also represents common feelings of loneliness and ‘not fitting in’. This life is compared to the plight of World War II, where millions of children were evacuated in Britain, bringing together all sorts of people who would not have otherwise met, in the struggle for safety.

Will is an ordinary child, who enjoys playing with Lego and his dog Rollo. Will’s War explores the differences between the two time periods by placing a modern day child into the chaos of the 1940s. Will experiences a situation that is far more devastating than his own. With absent fathers fighting in the war and children separated from their families to live with complete strangers, Will comes to regret his stupid row with his mum and misses his future world.

Shaun Russell, head of publishing at Candy Jar, said: “If your child is learning about World War II, this is a book worth getting. It shows the past in a way that children can really engage with. It’s informative in a fun way.”

A cross between Back to the Future and The Railway Children, this book takes you back to a time of fear and devastation. A time that is difficult to imagine in today’s society. Will’s War brings the past to life, whilst introducing relatable issues for the kids of today. Will discovers both friendship and himself along the way, but can he discover how to get home? Join Will as he fights in his own war to return home.