Kate Lethbridge-Stewart is set to reunite with her legendary father! 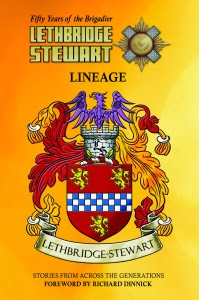 Candy Jar Books is very pleased to announce a new addition to the forthcoming 'Lineage' anthology. Fully approved by Reeltime Pictures, Kate Lethbridge-Stewart is set to reunite with her legendary father!

The story is called Of the Future and is written by range editor Andy Frankham-Allen.

"It's a great to finally make this happen. Keith, Marc and I have been in discussion for a while now about bringing Kate into the LSverse, and what initially began as a cameo in another Lineage story, has evolved into something much bigger. Of the Future is just the start, and takes us right back to the moment that tore Kate and her father apart, setting up the situation we found them in, in Marc Platt's Downtime. Marc, who created Kate for Downtime in 1995, with Mervyn Haisman's approval, is very happy with the story I've put together, which is good enough for me."

Lineage is due out in the summer, but can be pre-ordered now: