STRAIGHT FROM THE HORSE'S MOUTH 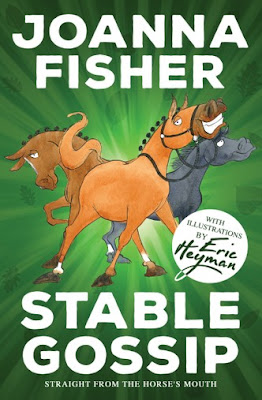 What’s a cowboy without a horse? Or a carriage without a horse to draw it? The partnership between horses and humans goes back over five thousand years. Many stories have featured these docile, faithful and intelligent creatures, with each generation having its own equestrian epic. Remember Champion the Wonder Horse, Mr Ed, Black Beauty or War Horse? Well, move over, Stable Gossip is here, ready to capture the hearts of a new generation.


And yet, to most of us – children and adults alike – horses remain mysterious creatures. Dogs love us, cats judge us… but horses?

It is to shed light on these enigmatic animals that Joanna Fisher has written her debut book for children, Stable Gossip, a collection of six original short stories lovingly illustrated by Eric Heyman.

As international Grand Prix dressage rider and trainer, Joanna has been riding for nearly forty years. And though the Stable Gossip gang are a bit more talkative than your average horses, their stories and personalities are all based on Joanna’s own animals.

Joanna says: “Everything in this book actually happened, so in a way these stories write themselves. But to give my horses a voice, I had to get inside their minds, to understand what they were thinking and their behaviour. Luckily, I have a gift of understanding.”

Formerly representing Great Britain internationally in Dressage for five years, being shortlisted for two Olympic Games, and having spent nineteen years training abroad, Joanna believes her success as a horsewoman is due to this all this hard work.

Joanna continues: “It’s always better to sit on a friend than to sit on an enemy. If you understand a horse, you can empathise with it, and together you can develop a relationship based on mutual trust and understanding, working daily with each other to achieve the best results.”

So as the Stable Gossip gang bicker, the young reader will learn about the real-life personalities of a group of horses, the way they see each other and about the bonds that form between these deeply social animals. Such lessons are woven effortlessly into the stories, so that the reader will come to understand the psychology of horses without even realising they are being taught.

There are the self-obsessed ones, like Nosey, prone to talking a lot, not to mention running amok through dressage competitions. There are the dopey ones, like Leo, constantly unsure of what exactly is going on. Or the prim and proper ones, like Flo – who’s a princess, don’t you know?

Along with their friends, Rumbo, Charmeur and Coco, the Stable Gossip gang are an eclectic bunch, but in their differences they express a message of companionship that is true to the spirit of a stable full of horses, as well as a positive moral for the young reader.

Across six stories, the gang argue, fall in love, practice for their competitions, celebrate Christmas and, well, just generally horse around. These stories are the first in what is intended to be an expanding range of Stable Gossip adventures, including future books and a possible animated series.

Editorial Co-ordinator for Candy Jar Books Will Rees says: “As a brand, Stable Gossip has huge potential. A lot of children’s books are about anthropomorphised animals. But Stable Gossip is that rare thing: a children’s book where, behind the fun, there’s an author who’s a bona fide expert on her subject. Young readers will not only be entertained by this book, but will learn a lot too.”
Posted by Candy Jar Films at 15:50