What's the Matter With Slithers?

Well, not according to Barbara Michaels, whose first book, What’s the Matter with Slithers?, provides a rather different picture of these oft-maligned creatures. 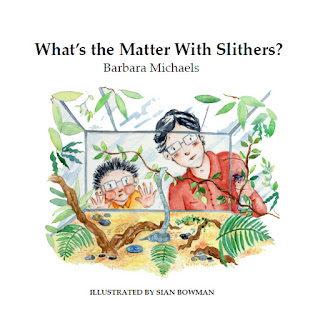 Not that she always felt so warmly towards our no-legged friends. When her grandson first decided to get a pet snake, Barbara was wary. But the newly christened Mr Slithers soon won her round.

Barbara says: ‘You might not think so, but snakes have personalities. A snake is as much an individual as a cat or a dog. And just like a cat or dog, once you get to know one, it becomes part of the family.’

And so, hoping to show this seldom seen side of snakes, Barbara was inspired to write What’s the Matter with Slithers?, a charming tale of a corn snake with an itch he just can’t scratch. Adorably illustrated by up-and-coming artist Sian Bowman, it is a tale that manages what to many might seem the impossible: making a snake not only sympathetic, but cute!

The conclusion is gently educational, revolving around Slithers shedding his skin. While What’s the Matter with Slithers might be Barbara’s first book, it draws on her wealth of writing experience.

Barbara has had several short stories published, contributed to the award winning Laughing not Laughing, and has worked for many years as a journalist and a freelance writer; she is also part of the editorial board of Bimah, the magazine for the Jewish community of mid and south Wales. But most importantly, for many years Barbara has played the role of storyteller to her family. Barbara continues: ‘As a mother and a grandmother – soon to be great-grandmother. This isn’t the first time I’ve had to spin a tale to dispel a child’s fears, or to teach them something without them even realising it. I thought about this a lot while writing my book. I wanted to capture the feeling of a good old fashioned bedtime story: something cosy and comforting which leaves you having learned something, but most of all, with a smile.’

So Slithers might just dispel the phobias of children and parents alike. The launch of the book on 26th November was a great success.

Candy Jar’s Editorial Coordinator Will Rees says: ‘What’s the Matter with Slithers? is a truly endearing tale. The illustrations alone are enough for you to want a Slithers of your own, and combined with Barbara’s sweetly traditional storytelling, the book is an irresistible package.’
Posted by Candy Jar Films at 12:59