Candy Jar is really excited to be getting involved with the Spread The Word Literary Festival 2016, coming to you on World Book Day, Thursday March 3rd.

The amazing event is hosted by Stephens & George Centenary Charitable Trust in Merthyr Tydfil town center, and is one of the biggest annual arts and literature festival in Wales for children.

Spread The Word Festival was first launched in 2013, and with the great success that was seen has been a recurring fixture in Wales' annual line-up. With previous themes including Lewis Carroll's Alice In Wonderland, this years event is based on characters created by the iconic Cardiff-born author Roald Dahl.

The main influence of the event will be Roald Dahl's hugely influential classic Charlie and The Chocolate Factory, and the event locations will be teaming with Oompa Loompas, and even Willy Wonka (on stilts!!) Keep an eye out for the Glass Elevator! 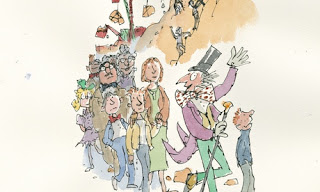 There will be author-led talks and workshops for children of all ages, as well as the opportunity to buy signed copies of their books and meet the authors in person.

Keep an eye out for the event schedules, and we will see you there! (hopefully in costume)

Spread The Word Festival will be held at various locations in the Merthyr Tydfil town centre Thursday March 3rd, 2016. Further details will follow.