Here at Candy Jar we're well in to January now, and the memories of Christmas and New Year's parties are fading fast...  But that doesn't mean it's all stopped now!

Nobody's taking 2016 by storm quite as much as our author Nathan Wyburn; here's what he's been up to so far.

Alongside his trusty partner in crime Wayne Courtney, Nathan hosted the charity concert held by the amazing organisation Prince's Trust Cymru, a great charity which helps to get young people in Wales into education and training. The line-up included great acts including The Voice's Stephanie Webber and Ragsy, X Factor's Helen Fulthorpe.

Wyburn and Wayne are huge supporters of The Prince's Trust Cymru, and they have started their own fundraising initiative for the organisation via JustGiving.

People who donate to their cause will be entered to a prize draw and be in with a chance to win:

The competition closes on November 1st 2016, so there's plenty of time for you to donate as much or as little as you are able, and the winner will be chosen at random on that date. Good luck!

Following the success of Nathan's Not That Kind of Art book launch at Cameo Club, the venue has commissioned even more of the Welsh artwork.

Nathan's portraits of Welsh celebrities Tom Jones and Ruth Jones have been a huge hit at the Club's Wellfield Road venue, and there are three more to come in the refurbishment of Cameo Club's Pontcanna location. 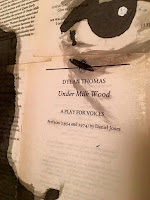 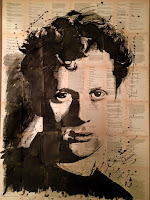 The first of trio has been released; an incredibly apt representation of the iconic Welsh poet Dylan Thomas, painted using writing ink on a background of Thomas' Under Milk Wood.

Look out for the next images, and head down to Cameo Club to check out Nathan's artwork in person*


This week, Nathan has also created a beautiful and fitting tribute to the icon and inspiration David Bowie, who sadly passed away on Monday. 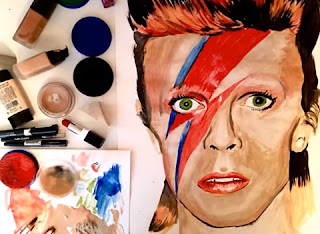 In typical Wyburn fashion, Nathan has demonstrated the impact of Bowie's legacy of inspiring creativity in others, by recreating the well-known David Bowie image using stage make-up.

Nathan, who began his tribute to the star almost as soon as he heard the tragic news, said: "The work I do lends itself to icons like him, and I felt like as an artist it was my duty to make this."


David Bowie's music and legacy will continue to live on, and will inspire many more people for years to come.


Check back in with the Candy Jar Blog to see what we and our authors have been up to, and follow us on Twitter too!

Keep up with Nathan on Facebook and YouTube, and be sure to read his Cardiff Times column

*Cameo Club, Pontcanna, is currently closed for refurbishment and re-open for business January 25th. Head over then!