The greatly anticipated, and already much celebrated children's book Amulet by Alison Thomas is out and available to purchase from Amazon and the Candy Jar Store. 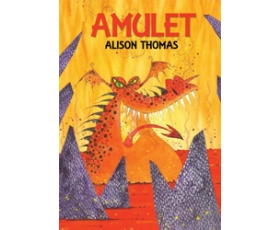 Amulet is a fantasy adventure story about Dion, an intelligent boy who has trouble fitting in with the world and grappling with the frustrations of everyday life, and he definitely doesn't like change.

'When Dion is taken away to a world beyond the imagination, he finds that his disciplined mind becomes his strength. But little does he realise his life is now in danger.

Will his sister Megan get to him in time? Not if the evil Queen has anything to do with it.

For a boy who doesn't like change, Dion's strength and determination are the things that he will have to rely on.'

“Amulet is a delightful story about Megan and Dion. On one level the reader is taken through a beautiful fantasy world which is a product of the children's imagination. On another level it intelligently highlights the difficulties presented by the real world to a child on the autism spectrum. The reader is shown how the child on the autism spectrum can be guided through life such that he becomes a full participant. I have no hesitation in recommending this book."


Alison said: “This story is about a brother and sister: Megan and Dion Coombes. Dion has some social and communication difficulties. The family employ many strategies used by children with Dion’s difficulties. Should the strategies help anyone, then Dion, Megan and I will have achieved something worthwhile.”

Amulet is out now and available on Kindle and paperback.