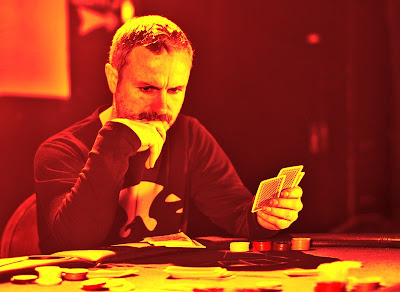 Terry plays 'Bad' Eddie Goodman, a small-time entrepreneurial robber, who ends up in a spot of bother after he is contracted to rip off a den of unsavoury villains. Terry isn't unfamiliar with acting having recently acted in a sci-fi short called 'The Halycon' filmed in Leeds (you can watch a trailer here). He also starred in the award-winning short film 'Frankly' last year and previously as an extra on 'Torchwood' and the feature film 'Outlaw' (2007).

In this new role, Terry really enjoyed playing his part in this gritty drama (rated 15 for violence and adult language) which features humour, stunts, violence and suspense. 10 Per Cent, written and directed by Cardiff-based film student Chris Bevan, is currently in post-production and will be released in the summer at The University Of South Wales.