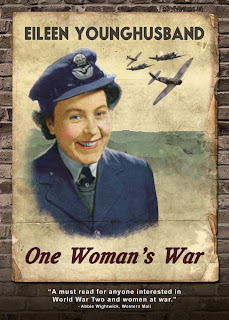 One Woman's War, the latest publication from Candy Jar Books, was officially launched today at RAF St Athan on the same day as the author's 90th birthday.

Eileen Younghusband, a former member of the WAAF, celebrated in style by sharing a glass of Champagne with Wing Commander Lyndon Jones, who just happens to share the very same birthday (and is exactly half her age). Eileen was treated to a tour of the base in the 'Queenie' Land Rover - a vehicle normally reserved for royal vistors - before meeting young RAF recruits and other VIPs over coffee and cake.

In 1940, Winston Churchill made one of his most stirring speeches. In his address, given in Parliament, he praised the Battle of Britain aircrews and immortalised them as “The Few”. Alongside them was another group – even fewer and mostly women – whose work was too secret to acknowledge. These were the young women in the Filter Room, calculating the targets of the Luftwaffe’s bombing fleets from information supplied by Britain’s pioneering Radar network.

One Woman's War reveals the truth about the forgotten wartime women, barely out of their teens, who were employed for this critical job because they were quicker than men. They were given an awesome responsibility, working against the clock, knowing that their cool head and proficiency at maths could make the difference between a bomber being shot down in flames or getting through to drop its deadly cargo on a British city.

The book also has contributions from Dame Vera Lynn and Emma Soames. Emma Soames, who is Winston Churchill’s granddaughter and editor-at-large at Saga Magazine, believes that this story must be heard. She says: “It is excellent to be reminded what a great debt we owe to this group of brave, dedicated young women who, in a highly charged and stressful situation, where time was of the essence, did so much to save our country from destruction. One Woman’s War adds to the war archive that becomes increasingly important as the participants in the 1939-45 war gradually age and pass away, many of them taking their memories with them. As well as producing this readable account of her years in uniform, Eileen Younghusband has brought an extraordinary period and a previously unrecorded part of our air defences to life.”

One Woman's War is now available from the Candy Jar Bookstore and is priced £15.99 (plus p&p).