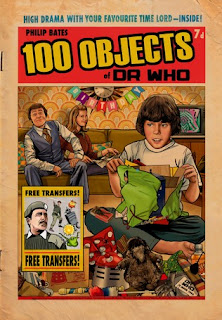 Candy Jar Books is pleased to announce 100 Objects of Dr Who. Written by Philip Bates, the book collects together facts and opinions from all fifty-seven years of the best science-fiction series in the world.

Objects of interest include the Space-Time Visualiser, the sonic screwdriver, a talking cabbage, the Revenge of the Cybermen VHS, River Song’s diary, the BBC Sound Effects No. 19: Doctor Who Sound Effects vinyl, the 1996 Series Bible, a Bubble Shock bottle, the Seal of the High Council of Gallifrey, and a mouldy old Slitheen.

Philip Bates currently runs the Doctor Who Companion website (the popular successor to Kasterborous), and has previously written for Candy Jar. His ‘10 Objects of the Brigadier’ piece was featured in non-fiction book The Brigadier: Declassified.

Candy Jar Head of Publishing, Shaun Russell, says: “When Philip submitted his piece for The Brigadier: Declassified I was blown away by the quality of writing. His take on the series was unlike anything I’ve read before. His writing reminds me of Doctor Who: The Completely Useless Encyclodpedia from 1996 by Chris Howarth and Steve Lyons. I am truly excited that we have been able expand beyond ten objects.”

100 Objects of Dr Who tells the story of the series in a rather unconventional way. It’s not a straight chronology of the series, but more a temporal quide, jam-packed with fascinating information for the distinguished Doctor Who fan. Philip says: “My book does feature the behind-the-scenes trivia you would expect, but I wanted to go one further. So, I’ve included sections on the live events not everyone’s been lucky enough to experience, asked the question how Christ the Redeemer relates to Doctor Who, as well as looking at the bizarre world of fake merchandise. I basically wanted to go off the beaten track, jumping backwards and forwards in Who history.”

The cover has been lovingly produced by Martin Baines, who recently completed the art for Candy Jar’s hardback edition of the Downtime sequel, Child of the New World. Martin says: “I really enjoyed working on this book. I wanted to emulate the look of 1970s comics such as Scorcher, Valiant or TV Comic. Added to this, I’ve always loved Doctor Who Weekly and it was great to pay homage to this as well.”

Philip really likes the cover and feels it sums up his book perfectly. Philip continues: “When Shaun sent me Martin’s cover I thought, wow! You don’t need me to tell you how brilliant it is: feast your eyes! Spotting the small details is a joy, but the most impressive thing is how evocative the piece is. There's a warmth and playfulness about it. The yellowing page surrounding instantly brings to mind that wonderful smell that encompasses you when you enter a second-hand book store – a reminder that all these stories have been experienced by previous generations. Suffice to say, I love it.”

"So, all of time and space, everything that ever happened or ever will: where do you want to start…?"

100 Objects of Doctor Who is a celebration of everyone’s favourite sci-fi show. Perfect for fans, no matter your mileage – whether you’ve just started your journey through all of time and space, or have lived through the highs, the lows, the Wildernesses, the Androzanis, and the Twin Dilemmas.

And much, much more!

This is a book about Doctor Who. But probably not the one you’re expecting