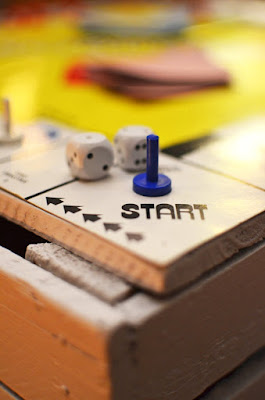 ‘In the beginning was the Word, and the Word was with God, and the word was God,’ or so it seems according to John 1:1 of the King James Bible. If you were to read Genesis it states: ‘In the beginning God created the heavens and the earth.’ Now, I am not a religious person but, nevertheless, this seems slightly contradictory to me. What actually came first, the Word or the creation of heaven and Earth? Does it depend on which text was produced first? I’m no doubt aware that the argument would be that God is the Word so therefore the creative acts by God constitute ‘the beginning’, but this still does not account for the fact that the first word is in fact ‘In’. Although, maybe I’m being pedantic...

Maybe another way of considering the beginning of a text is to think about it in terms of a slightly different question, such as when does your holiday begin? Is it the moment you get to wave your all-inclusive wristband at a bartender to order that first ice-cold San Miguel? Is it the instant you feel the jets roar as you begin take-off? Maybe it is when your suitcases are clamped shut, the daily ritual of the countdown each day in work, the final payment for the holiday? Go even further back and the adventure could begin when you book it, earlier still when you flick through the sun-kissed images of the brochures or even the conversation when you decide you need a holiday. Further still, it may be a holiday you’ve dreamed of for years ever since Dave and Sue (from next door, they’re always bloody going away) returned from theirs and couldn’t wait to show off their tans. The point here is that a journey of any sort – whether it be taking a holiday or indeed writing a book – has a starting point and it is certainly occurring before your pen reaches the paper.

So, what of the beginning of a novel? What is it that a writer must do to ensure that the reader stays the course? Numerous challenges are presented to readers which can be problematic as writers are unable to discern the literary ability of their readership. Readers are already presented with lots of new information regarding names of characters, social circles, family, personality traits (some of which are hidden); they also have the problem with getting used to a writer’s chosen style. As David Lodge argues: ‘However one defines it, the beginning of a novel is a threshold, separating the real world we inhabit from the world the novelist has imagined. It should therefore, as the phrase goes, “draw us in” '(2011, 4-5). Depending on the reader this may only allow for their interest to be maintained across the opening few chapters while some may read the first page before returning it to the book to the shelf.

Some writers are able to summarise a key theme within the first sentence alone. Jane Austen’s opening sentence to Pride and Prejudice (1813) begins: ‘It is a truth universally acknowledged, that a single man in possession of a good fortune, must be in want of a wife’ (p. 5). The issues of women’s purpose in society at the time coupled with the popular institution of marriage, not least the desire for it, meant that this single sentence captured the tensions of all the events which followed thereafter. Presented as a statement, it also points out, rather ironically, that this is a truth as opposed to a socially constructed convention. Another example, cited in John Mullan’s How Novels Work (2006), reviews the example provided by George Orwell in Nineteen Eight-Four (1949) which is: ‘It was a bright cold day in April, and the clocks were striking thirteen.’ Mullan observes that ‘The statement is made as if it were natural and already we are made to inhabit the logic of dystopia’ (2008, 36).
Such succinct sentences may not be appropriate for use in every novel, but a few lines or sometimes even the first page can provide guidance to the reader for what lies ahead. Read the opening paragraph to Dickens’ A Christmas Carol (1849, 33):


Marley was dead: to begin with. There is no doubt whatever about that. The register of his burial was signed by the clergyman, the clerk, the undertaker, and the chief mourner. Scrooge signed it: and Scrooge’ name was good upon ‘Change, for anything he chose to put his hand to. Old Marley was as dead as a door-nail.

The first three words present a simple statement: ‘Marley was dead’. This is, after all, a ghost story so the reader is given the identity of the first ghost that they will later be introduced to. It is presented as fact, having been witnessed and signed to by a number of people who would have overseen the funeral, Scrooge himself was there to witness his old friend lying in the coffin. He was, as Dickens re-emphasises, ‘dead as a door-nail’. So why would a writer go to such lengths to insist on making this point? As the well-known story goes, this is a tale of the supernatural so Dickens was preparing his audience to set aside their grip of reality and lend their imagination to the story which lay in wait. Dickens, later on the same page, even overtly makes this point: ‘There is no doubt that Marley was dead. This must be distinctly understood, or nothing wonderful can come of the story I am going to relate.’ He wants the readers to embark on the journey and suspend their beliefs. A secondary theory may be because Victorian society could have been shocked or outraged as they were at other Gothic tales; by reiterating the fact that it was simply a story – of community and goodwill – he not only represents the supernatural as entertainment but he is also able to continue offering a critique on the plight of the unfortunates living in London at such a time of festivity.

The essence of characters can also be captured in these opening lines. One good example is of the laissez-faire attitude of the – sort of – self-titled character in Geoff Dyer’s Jeff in Venice, Death in Varanasi (2009) as if he couldn’t even be bothered to think of an original name, very clever indeed. The attitude of the character Jeff, who is a writer himself, is humorous and engaging from the beginning, but he is tired of writing about mundane topics and things which he does not find interesting. This defeatist and frustrated monologue is embodied by a single line he types out on an email to his editor and it simply reads: ‘I just can’t do this shit any more. Yrs J.A.’ Yes, he couldn’t even be bothered typing it out fully such was his contempt for the piece of writing which he had been commissioned to do. Furthermore, after mulling over whether to send it, he then deletes the draft and goes for a walk! This attitude towards other people and situations he finds himself in is consistent throughout the novel unless he finds something intriguing or exciting but, as a reader, you cannot help but appreciate that you’re reading about a writer who is writing about writer who doesn’t want to write. Alright?

Now that we’re past that tongue-twister we can have a look at the last example from Nathan Filer’s The Shock of the Fall (2013) which focuses on narrative. I’ll review narratives properly another time but this example is certainly worth a look as it’s one I’ve always remembered, the opening lines read: ‘I should say that I am not a nice person. Sometimes I try to be, but often I’m not. So when it was my turn to cover my eyes and count to a hundred – I cheated’ (2013, 1). Does this first person self-evaluation mean that he is not a nice person? Not necessarily, but you would be led to believe that this is indeed the case. It’s also somewhat comically that the example he drew upon is cheating in hide and seek. What is important though is the reliability of the narrator and these opening sentences are for the reader’s attention so that they can think about these things as they move forward. Without wishing to spoil too much of the story I believe that these statements he makes are in fact true – to him – but his mental state is not one which can determine accurate events from his youth. He believes these things and relays them faithfully but that does not necessarily mean they are true. You’ll have to read the novel to find out more.

As a reader myself I once recall attempting We Need to Talk About Kevin (203) by Lionel Shriver and being blown away by a saturation of elevated language. My initial experience was not one that flowed so I was unable to get caught up in the text until a good four or five chapters in. The vocabulary was challenging so ‘Google define’ was my best friend, the epistolary to an absent reader was as yet unappreciated and I had not been able to warm to the narrator. I’m sure these challenges will come around again in future when I attempt a new author but - and I’m not ashamed to say it - I could have put the book down. I didn’t. It turned out to be one of my favourite of all time and I have recently found it in a classroom being taught to A level students which pleases me. How close was I to missing out on such an experience though?

The journey of every multi-selling novel out there is the same; in the beginning they start with just one reader: you. You are the words and, while you may not necessarily create them, you breathe life into them and create something in the process.