LUCY WILSON UP FOR SCRIBE AWARD!

Candy Jar Books is pleased to announce that The Lucy Wilson Mysteries: Curse of the Mirror Clowns by Chris Lynch has been nominated for the prestigious Scribe Awards.

The Scribe Awards, from the International Association of Media Tie-In Writers, acknowledge and celebrate excellence in licensed tie-in novels and audio dramas based on TV shows, movies, and games.

The Lucy Wilson Mysteries is a licensed Doctor Who spin-off novel and features the granddaughter of the Doctor’s best friend, Brigadier Lethbridge-Stewart. Based in Ogmore-by-Sea these YA sci-fi books tackle prejudice against differences and promote diversity, self-confidence and acceptance for young people.

Three books have already been published by Sue Hampton (Avatars of the Intelligence), Chris Lynch (Curse of the Mirror Clowns) and John Peel (The Midnight People), with two more on the way by Wink Taylor (The Bandril Invasion) and Tim Gambrell (The Brigadier and the Bledoe Cadets). 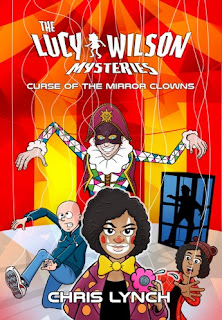 Curse of the Mirror Clowns by Cardiff-based film and comic writer Chris Lynch is fighting its corner against some of the biggest TV and film franchises in the world including Star Wars and Small Foot, as well the New York Times bestselling author, Jonathan Maberry. Chris says: “I was delighted to discover I’d been nominated for this award. I’m certainly in illustrious company! Hopefully my clowns are up to the challenge.”

Originally created by Shaun Russell and Andy Frankham-Allen, the first Lucy Wilson novel was brought to life by YA author Sue Hampton. Shaun says: “Sue’s instinct with the first book Avatars of the Intelligence was spot-on. She got the characters straight away and delivered a book reminiscent of the popular Sarah Jane Adventures, also based on Doctor Who.”

Sue really enjoyed working on the first book. She says: “Lucy is dauntless, loyal and whip-smart. She’s a modern girl with strong values and opinions, which means that she feels the injustices in the world even more strongly than most and always stands up for what’s right. I wish Chris good luck with the awards.”
Posted by Candy Jar Films at 17:37