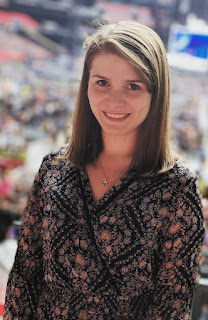 Candy Jar is delighted to announce a new addition to their team. Keren Williams joins the company in a newly created role: Children’s Digital Assistant.

In this capacity, Keren will be combining editorial, marketing and administrative responsibilities in relation to Candy Jar’s ever-expanding roster of children’s literature, as well as assisting in the expansion of the company’s self-publishing imprint, Jelly Bean. She brings to the role a lifelong passion for children’s literature, with her two favourite children’s novels being J.M. Barrie’s Peter Pan and Lewis Carroll’s Alice’s Adventures in Wonderland.

‘Keren joined us for a work experience placement while completing her master’s degree. We were struck by her energy and enthusiasm, as well as her insightful comments, particularly in regards to one our new children’s titles, The Lucy Wilson Mysteries: Curse of the Mirror Clowns. For those who don’t know, this is a children’s spin off of our Lethbridge-Stewart range, and not only did Keren improve the book editorially, but tasked with marketing it, she managed to introduce the book to a swathe of new reviewers and readers. That was when we realized she had the insight, practicality and creativity we needed to push our children’s range to new levels.’

With a range of recently and soon-to-be released children’s titles, including Lost in Christmas (by Hollywood institution Michael Sloan) and The Bonkers Book of Jobs (an irreverent look at the weird and wacky world of work), Keren is sure to have her hands full right away. But it is a challenge she is relishing:

‘The best thing about indie publishing is you get to pitch in on all sides of things – everyday is a new challenge, which keeps things interesting. Candy Jar, I mean we have got a lot of fun stuff in the pipeline, and I can’t wait to get stuck in.’