BRITAIN’S GOT TALENT’S CRUMBLE LADY IS A SUBURBAN SUPERHERO! 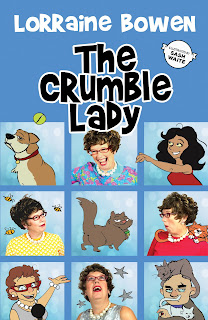 Britain’s Got Talent legend Lorraine Bowen has written a children’s book, The Crumble Lady, based on the song that first shot her to fame on the popular ITV talent show.

Lorraine says: “I am really excited to be launching my new fiction book for children. It’s been really fun creating these crumbletastic stories with crazy characters and surreal situations! I hope that all the young readers out there like what I have done.”

Lorraine’s first venture into children’s fiction is a selection box of delicious and zany adventures about her fictional alter-ego, the Crumble Lady. Added to this, the book also features five scrumalicious crumble recipes –perfect for baking!

Lorraine joins the ranks of recent celeb authors such as Tom Fletcher and, of course, Lorraine’s biggest supporter, David Walliams.

Of The Crumble Lady, Walliams says: “My golden girl Lorraine Bowen’s talents are endless. Making crumble, singing about crumble, and now writing a book about crumble. It’s sure to become a literary classic that will go down in history as one of the greatest books concerning crumble ever written. Lorraine Bowen is a golden talent. I predict this book will win the Booker Prize!”

The Crumble Lady is yet another string to Lorraine’s bow in her mission to bring a little sunshine into the world. Over the years Lorraine has been touring with her own variety roadshow, pouring positivity wherever she can. Best known across the globe for her Golden Buzzer performance on
the television reality show Britain’s Got Talent (which has now reached over 9 million views on YouTube), Lorraine has been performing all over the UK for over a decade with live shows such as Lorraine Bowen’s Vital Organs, Lorraine Bowen’s Polyester Fiesta and most recently Be Original,
described as “an interactive musical ideasfest for 8-11 year olds” and funded by Arts Council England.

Shaun Russell, head of publishing at independent publisher Candy Jar Books, says: “We’re delighted to have Lorraine on our roster, and with such a cheerful and energetic book! Lorraine is a storm of positivity in every project she undertakes, and this has been no different.”

Reminiscent of Jeremy Strong and the Horrid Henry series (with artwork by Basil M Waite) The Crumble Lady features a troupe of colourful characters living on her “not normally very normal” street in Brighton, from the Crumble Lady herself to her neighbours: policeman Constable Seaweed; Vegetable Sue, the friendly local greengrocer; Gellina Gelato, the Crumble Lady’s good friend and fellow dessert-lover; Mr Staccato, who runs the village choir; Pearl Barley, and Mrs Marge.

Shaun continues: “Lorraine’s fictional alter-ego is certainly the star of the show, and is just like the real person – fun, compassionate, and into everything! The Crumble Lady is perfectly portioned for dipping in and out whenever you need a giggle, and Lorraine seems poised to conquer the world.”

The book is released alongside Lorraine Bowen’s audio CD of the same name, featuring fifteen original tracks including The Crumble Lady Theme, Catfood Crumble, The Measuring Song and Life is Like a Crumble – so you can sing along as you read. The album is available to purchase as CD
from her website, mp3 download from Amazon plus streaming from Spotify.

Contact Info
Lorraine is a lively and entertaining interviewee and is available for appearance and performance on live and pre-recorded TV and Radio shows. Interviews can be arranged in person, by phone, Skype or
submitted in writing by contacting:
Shaun Russell at Candy Jar Books shaun@candyjarbooks.co.uk