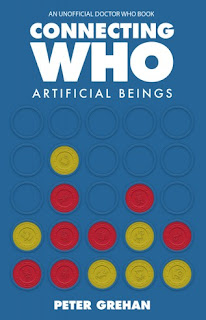 Penarth Pier Pavilion in Cardiff will host a special event based on the Doctor Who reference book Connecting Who: Artificial Beings on Sunday the 26th March 2017 at 6pm.

Written by Penarth-based Peter Grehan, the book is a perfect read for those who want to delve deeper into the hidden mysteries and secrets of the Doctor Who universe.


In recent years Penarth Pier Pavilion has staged several Doctor Who events, and guests have included Sophie Aldred and Louise Jameson. Peter says: “Penarth Pier Pavilion has a growing reputation for high quality cult events. It such a privilege to be included in the line-up and I hope many fans come along to see me.”
Free entry to the event includes a presentation entitled “HG Wells and the Daleks,” catering for a mature sophisticated audience, as well as appealing to younger fans of Doctor Who. This will be followed by a question and answer session and book signing.


Connecting Who: Artificial Beings examines some of these connections; specifically in regards to those artificial beings (clever computers, robots, androids and cyborgs) we find in Doctor Who.
Peter says: “Imagine Doctor Who as a tree trunk that keeps growing taller and taller, fed by roots that reach down into history, mythology, psychology, folktales, religion, science and the wealth of science fiction that exists in the world. It’s not surprising therefore to find that Doctor Who connects with a lot of other stuff. “
The book investigates artificial beings such as the Cybermen, Daleks, Autons, Weeping Angels, Gangers, Morbius, Xoanon and the Yeti, making connections to literary and scientific sources.

Shaun Russell, head of publishing at Candy Jar Books, feels that Connecting Who: Artificial Beings offers a fresh perspective on the Doctor’s travels through space and time. He says: “Peter has been a fan of Doctor Who since day one and his take on the Whoniverse offers a personal outlook on growing up with the series. His childhood love of robots coincided with the introduction of the Daleks and, despite the Daleks not really being robots, their cries of exterminate cemented his love for all things Doctor Who.”
Peter is no stranger to Doctor Who, having worked as a host at the Doctor Who Experience and penning the audio drama Sontarans: Silent Warrior for BBV. He says: “In my book I have enjoyed making the connections between Doctor Who and real-life computers, robots and cyborgs. These connections run deep into culture, history and science. It is my hope that fans will not only enjoy reading my book, but begin to connect the dots themselves.”
Connecting Who: Artificial Beings is available from
http://www.candy-jar.co.uk/books/connecting%20who.html
Posted by Candy Jar Films at 12:43