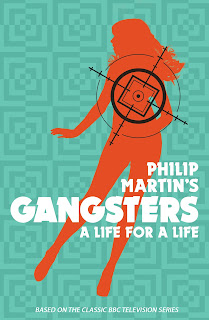 Candy Jar Books is reissuing the two Gangsters novelisations written by Philip Martin, the writer of Vengeance on Varos and The Trial of a Time Lord parts 5-8.
Originally broadcast as the 1975 Play for Today, Gangsters featured Maurice Colbourne (Resurrection of the Daleks and Attack of the Cybermen) and provoked a storm of controversy. Its violence was graphic, its portrayal of contemporary racism authentic, its depiction of the mean streets of Birmingham unsparing.


But Gangsters combined this scandal-inducing realism with a daring, postmodern style of storytelling, eschewing the po-faced worthiness of much of Play for Today’s output for a genre-bending self-referentiality that aimed to entertain as much as to hector.

Critics dismissed it, but audiences loved it – so much so that the BBC quickly commissioned two series to continue its story. Airing in 1977 and in 1978 these two six-part serials prompted a critical reappraisal, and ever since, Gangsters has been considered a cult classic, garnering plaudits as one of the most singular shows ever broadcast by the BBC.
This reputation for originality is well deserved. Gangsters featured one of the first truly multiracial casts to be seen on British screens; it depicted both the exploitation of illegal immigrants and the conniving of magical kung fu assassins; the misery of heroin addiction and cut aways to Martin himself dictating the script. It is a truly unique piece of writing.

Now Philip Martin’s uncompromising, anarchic take on the crime genre returns with the re-publication of the two novels that accompanied the TV series. Together in the same volume for the first time, A Life for a Life and Vendetta are two standalone stories that demonstrate the same cocktail of verve and verisimilitude that characterises the show.
Not only furthering the story of the show’s protagonist, John Kline, but setting up what will be the first brand new addition in the Gangsters story for almost thirty years – Death Touch, to be published by Candy Jar Books in 2017 – Philip Martins’ Gangsters is an indispensible addition to this chapter in cult television history.

As the editorial coordinator for Candy Jar Books, Will Rees, says:
‘With our recent publication of the Dr Strangelove novelisation, and our Lethbridge Stewart range, Candy Jar has an established reputation for publishing quality material from the world of cult film and television. Fans of cult media are real devotees, and it is their fandom that keeps these original and challenging works alive. The Gangsters novels have been collector’s items for far too long, and we will get as much of a thrill from making them available to all the fans as they themselves will get from reading them.’

So with these upcoming releases, enthusiasts will finally be able to complete their Gangsters collections, and this iconoclastic blend of the high and the low, the serious and the absurd, the realist, the postmodern and the sheer surreal can finally be enjoyed as its creator always intended it to be.