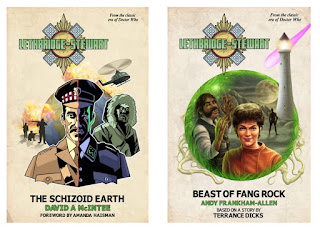 Head over to our shop right now to claim this exclusive deal!

On the eve of war, something appeared in the sky; a presence that blotted out the moon. Now it has returned, and no battle plan can survive first contact with this enemy.

Plagued by nightmares of being trapped in a past that never happened, Lethbridge-Stewart must unravel the mystery of a man ten years out of his time; a man who cannot possibly still exist.

Why do the ghosts of fallen soldiers still fight long-forgotten battles against living men? What is the secret of the rural English town of Deepdene? Lethbridge-Stewart has good reason to doubt his own sanity, but is he suffering illness or injury, or is something more sinister going on?
The second novel in a brand-new series of novels set just after the Doctor Who serial The Web of Fear, featuring the characters and concepts created by Mervyn Haisman & Henry Lincoln.
Beast of Fang Rock (Lethbridge-Stewart Series 1, Book 3): -

Fang Rock has always had a bad reputation. Since 1955 the lighthouse has been out of commission, shut down because of fire that gutted the entire tower. But now, finally updated and fully renovated, the island and lighthouse is once again about to be brought back into service.
Students have gathered on Fang Rock to celebrate the opening of the ‘most haunted lighthouse of the British Isles’, but they get more than they bargained for when the ghosts of long-dead men return, accompanied by a falling star.
Colonel Lethbridge-Stewart is brought in to investigate what he believes to be signs of alien involvement. But it is not only Lethbridge-Stewart who has an interest in Fang Rock. Anne Travers is called to her family solicitor’s, who have in their possession a letter from Archibald Goff, the paranormal investigator who once visited Fang Rock back in the 1820s, and along with it a piece of alien technology.
What connects a shooting star, ghosts of men killed in 1902 and the beast that roamed Fang Rock in 1823? Lethbridge-Stewart and Anne Travers are about to discover the answer first hand.

Don’t miss out! Order now while the offer lasts!
Posted by Candy Jar Films at 17:00