Candy Jar Books is pleased to release the cover art for the next Lethbridge-Stewart series novel, Moon Blink by Sadie Miller. It boasts a revamped logo and brand new artwork by Adrian Salmon, who has previously worked on covers for the Lethbridge-Stewart titles, The Schizoid Earth and Mutually Assured Domination. 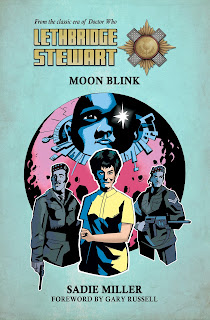 Candy Jar Books launched the fully licensed Lethbridge-Stewart series in February 2015, with Andy Frankham-Allen’s The Forgotten Son kicking off the venture in style. Three more titles were subsequently released; each met with high praise from fans and the press.

The blurb for Sadie's Moon Blink has also been released:

July 1969, and mankind is on the Moon. Both the United States and Soviet Russia have lunar bases, and both are in trouble.

Back on Earth, Anne Travers has learned she is about to be visited by an old friend from America, Doctor Patricia Richards. Lance Corporal Bill Bishop is aware of the visit, and is on hand to meet Richards.

She brings with her a surprise, one which the Americans and Russians wish to get their hands on. But the only man who can truly help Anne, Colonel Lethbridge-Stewart, is away in Scotland.

It’s a game of cat and mouse, as Anne and Bishop seek to protect the life of an innocent baby – one that holds the secrets to life on the Moon.

A series of novels from the classic era of Doctor Who, starring Anne Travers and Colonel Lethbridge-Stewart, based on the characters and concepts created by Mervyn Haisman and Henry Lincoln.

Shaun Russell, Head of Publishing at Candy Jar Books says, “We wanted to do something different this year, and the revamped logo and background colour reflects that. Colin Howard has done a fantastic job of giving Simon Williams’ original design a bit more weight.”

Adrian Salmon began his career painting illustrations for magazines before drawing his first comic strip “Judge Karyn” for Judge Dredd Megazine. Following this, he drew Cybermen for Doctor Who Magazine, and has worked with the magazine for the last twenty years. He dipped his toes into the creator-owned market with writer Robert Tinnell on THE FACELESS: A Terry Sharp Story, starring occult fighter and film director Terry Sharp, which was published by Image Comics. He created the artwork for The Schizoid Earth and Mutually Assured Domination for Candy Jar Books in 2015, and has more covers lined up for later in 2016.

Adrian says: “It was an honour to be chosen to draw Sadie’s cover for Moon Blink. We went for something emblematic, echoing the great Target covers of yore. I ended up sending two colour versions which Shaun brilliantly combined to make the final cover.”

“We are delighted with this latest piece of work from Adrian,” says series editor Andy Frankham-Allen. “And this time, not only do we highlight our co-stars Lethbridge-Stewart and Anne Travers, but we get to show the world Lance Corporal Bishop; a fan favourite from three of last year’s titles, now a regular in the series.”

Sadie Miller enjoyed a career as a child actress through many voice-over parts, making her screen debut when she was eight playing Penny in the BBC film Royal Celebration. She is best-known to Doctor Who fans for her role in two series of Sarah Jane Smith audio dramas produced by Big Finish in 2002 and 2006. Sadie won much critical acclaim for the role of the wheelchair-bound Planet 3 researcher, Natalie Redfern, particularly in the story Test of Nerve. She completed courses with the National Youth Theatre, the Royal Court Theatre’s Young Writer’s Programme, and RADA’s Shakespeare Course. She earned a BA in English and Related Literature, and graduated with honours. She is currently working on an original Young Adult novel, having already contributed to anthologies. In 2014 she was a finalist for the Glass Woman prize with Mirandolina.

Sadie’s book headlines the 2016 series of Lethbridge-Stewart novels, and is published in the spring, followed by The Showstoppers by Jonathan Cooper and The Grandfather Infestation by John Peel. A further three novels will be released in the autumn.

The usual discounted pre-order bundles will be on offer from Candy Jar, with a new subscription deal for those wishing to get six books for the price of five!

Lethbridge-Stewart: Moon Blink by Sadie Miller is due to be released April 2016. It can now be pre-ordered (individually, or as part of a bundle/subscription) from Candy Jar Books HERE.
Posted by Candy Jar Films at 12:00