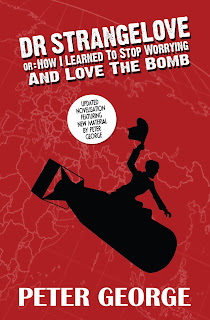 Candy Jar Books is re-issuing the official novelisation of Stanley Kubrick’s classic film Dr Strangelove or: How I Learned to Stop Worrying and Love the Bomb.

Included in this new edition is a never-before-published story by the original author Peter George about Strangelove’s early life. Offering an insight into the character’s background, the story slyly alludes to the real-life figures which inspired the creation of the character. In Kubrick’s film we know very little about the mysterious, wheelchair bound director of weapons research and development. This ‘exclusive’ new content is a fascinating and revealing addition to the Strangelove legend.

To all fans of 1960s literature and cinema this new content is a real must, its discovery mirroring the recent unearthing of Harper Lee’s lost To Kill a Mockingbird novel. David George, son of Peter George, found the story when going through the family archive. The 8000-word story, Some Notes on the Character of Strangelove, finally reveals just who this enigmatic scientist really was. David George says: “I hope all Strangelove aficionados will enjoy this short piece. It certainly adds another layer of enjoyment and understanding to the subject.”

Shaun Russell, head of publishing at Candy Jar Books, believes the discovery of this story is cause for excitement. He says: "No one, anywhere in the world, has really seen this before. It’s essentially Dr Strangelove: The Early Years. It's how he became Dr Strangelove, and how he developed the theories you see in the film. He's a lecturer at university, unhappy with his life and very unhappy about his relationship with women. So this story has a woman coming into his life and throwing everything up in the air. Then, because of something that happens with the female characters, he sits down and thinks 'how can I plan the end of the world?'"

Despite its status as a comedy classic, Dr Strangelove… was actually inspired by a downbeat source: Peter George’s novel Two Hours to Doom (Red Alert in the USA). A solemn look at the madness of Mutually Assured Destruction, Two Hours… was considered so chillingly accurate that it was used as a tactical training document on both sides of the Atlantic. Rated by the American Film Institute Dr Strangelove as cited the third funniest movie ever made; provocative, thought-provoking and laugh-out-loud hilarious, Dr Strangelove is a cinematic landmark.

Dr Strangelove or: How I Learned to Stop Worrying and Love the Bomb is published by Candy Jar Books and is available in paperback in October 2015.
Posted by Candy Jar Films at 12:33