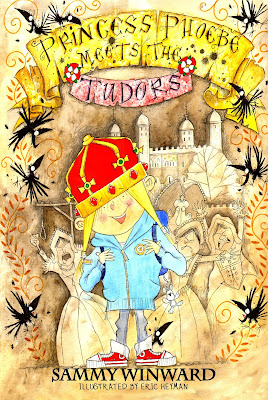 Candy Jar Books is delighted to announce the release of Princess Phoebe Meets the Tudors, the first children’s book by Sammy Winward. Having starred in the ITV soap Emmerdale for fourteen years, Sammy’s character left the show in dramatic fashion earlier this year. Since her exit, Sammy has been busy pursuing her long-standing interest in history. The result is Princess Phoebe, which follows the adventures of the eponymous princess as she travels through time meeting her illustrious ancestors.

The character of Princess Phoebe is dedicated to Sammy's own real-life princess – her ten-year-old daughter, Mia. Inspired by Mia's’s interest in tales of princesses of the past, Sammy’s book explores the lives of the Tudor Queen's Anne Boleyn, Jane Grey, Mary I and Elizabeth I. With the help of her mother’s magic book, Phoebe travels back to meet these figures and learn their stories. Sammy hopes that the strength and dignity of these characters has some important lessons for the modern girl. She said, “All girls love Disney movies, but there is another side to being a princess. I have always worried that, particularly as young females, we are brought up on a rich diet of fairy tale princesses whose single destiny seems to be that of meeting a handsome prince and living happily ever after. I have tried to do something very different, while still retaining the magic of these stories.” Educational and inspiring, Princess Phoebe shows that female empowerment is not just a modern day phenomenon, and teaches how it's not our circumstances that define us, but our actions.

Beautifully illustrated by Eric Heyman, Princess Phoebe Meets the Tudors was released on the 4th June 2015. To promote its release, Sammy has appeared on talk shows such as This Morning, and in OK! magazine and The Radio Times. Unable to fully leave acting behind, Sammy has also announced that she will be joining the cast of the hit ITV series Prey. She will be starring alongside Rosie Cavaliero and Philip Glenister in the second series.

Princess Phoebe Meets the Tudors by Sammy Winward retails at £6.99 and is currently available to order here.