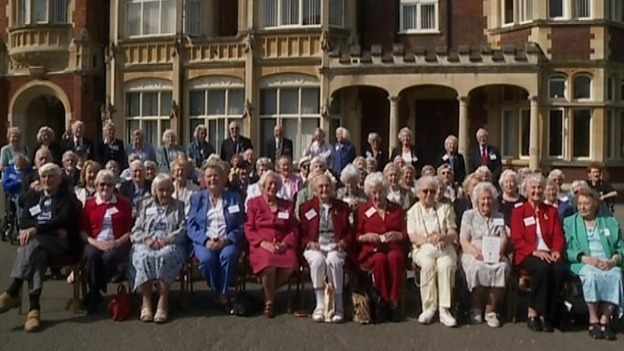 Eileen Younghusband, author of One Woman’s War, joined eighty of her fellow veterans at Bletchley Park this week to mark the seventy-fifth anniversary of operations beginning at the site. The code-breaking and intelligence operations conducted at the mansion are credited with shortening the Second World War by ‘two to four years’.

For many decades after the end of the war, employees of Bletchley Park were so tight-lipped about their top-secret work that Churchill labelled them ‘the geese that laid the golden eggs and never cackled’. However, with a major new film on their operations soon to be released, recognition for, and interest in, the team that cracked the enigma cipher is at an all-time high.


Eileen herself joined the war effort when she was nineteen, in 1941, and served as a Filterer Officer on RAF bases across the country.  Her own story went untold for years, she, like her colleagues,  having signed the Official Secrets Act; it is now available in One Woman’s War, an autobiography that is a testament to the invaluable work of the WAAF in the fight against fascism.
Posted by Candy Jar Films at 14:17