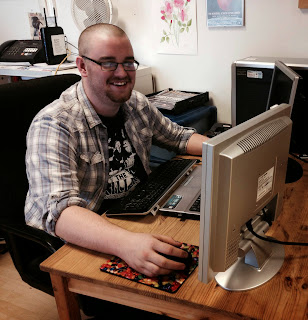 Bryn Lloyd is our Media Assistant and joined Candy Jar in August thanks to the Jobs Growth Wales Scheme. The Scheme supports businesses in recruiting young people aged between 16-24 by subsidising the wages of the new recruit for the first six months of their employment. Acorn Recruitment in Newport worked closely with Candy Jar to help them take Bryn on full time through JGW.

Candy Jar Ltd has found the scheme to be a great boost. Taking away the risk of recruiting new staff has meant the Directors can focus on building the company and using the extra help to do more. With big plans for the future, JGW could well be the helping hand that pushes Candy Jar up to the next level as a creative business.

Bryn has proved to be a great asset to the team, and has settled well into his role.

He says: "My job covers the two sides of the company – video production and publishing. Because of that, it's impressively varied. One day I may be copy editing a new book title, the other I might be out on a film shoot. It requires a broad set of skills and in my time at Candy Jar so far, I've learnt some valuable lessons about the industry."

Bryn is a Glamorgan University graduate, having studied Film for three years. "My course was almost entirely theoretical, so I didn't have much of a chance to get 'hands on' with camera equipment or anything. However, working for Candy Jar has meant taking on exciting challenges where I have learned more practical skills, such as using a digital camcorder or editing in Final Cut Pro, so naturally it's enormous fun."

Bryn has benefitted greatly from his first full time employment since graduating: "It's great to be in the office – because the work is so varied, no two days are the same and I'm grateful to have had an opportunity to play my part in Candy Jar's exciting growth over the coming months."
Posted by Candy Jar Films at 16:47