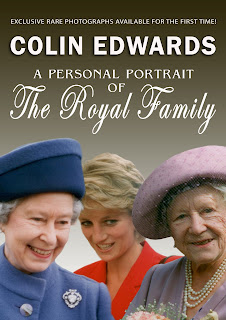 An upcoming book A Personal Portrait of The Royal Family, documenting one man’s remarkable life spent meeting and photographing The Queen, The Queen Mother and Diana, Princess of Wales has been given the green light by Candy Jar Books.

72-year-old Colin Edwards describes himself as an ardent Royalist, and you’d be hard-pressed to begrudge him this title.

It all began on with Queen Elizabeth II’s coronation. Although just 12-years old, Colin vividly remembers this historical occasion. He says: “My family was one of the first in the street to own a television, so our lounge was filled with friends and neighbours for the event. The atmosphere was fantastic, and I’m proud to say that I’ve been a Royalist ever since.”


Since that momentous day, Colin has spent much of his life touring the to attend Royal events, often waiting hours for a brief glimpse of The Queen.


He continues: “I get such a buzz from it. I’m always on ‘cloud nine’ after meeting Her Majesty. It is the anticipation of this euphoria which keeps me going, no matter how long I have to wait or how cold it gets. Everyone is there for the same reason. I have met some wonderful people at these events, and we often share photos at the end of the day.”


In A Personal Portrait of The Royal Family, Colin shares his experiences through a series of photographs. His style is a far cry from typical paparazzi snapshots, as he captures a natural, softer side of the Royal Family. These pictures are interspersed with delightful anecdotes in which he recalls his personal experiences with the Royal family. These heart-felt moments include the first time Diana, Princess of Wales, addressed him by name, and his delight at The Queen Mother attending one of his photography exhibitions.


Amazingly, Colin has never kept a diary. “I never expected that my experiences would be turned into a book,” he admits, “so it never occurred to me to write anything down.”


Thankfully, Colin has been blessed with a fantastic memory and, with the aid of his photographs, he has been able to remember and record his Royal memoirs. Behind the book is a genuine gentleman, whose aspirations for the book are as honest and humble as his love for the Royal Family: “I just want people, Royalists like myself, to enjoy it”.


A Personal Portrait of The Royal Family is due out later this year. The book also contains selected images of Prince Charles, Prince Harry, Prince William and the Duchess of Cambridge.


It can be pre-ordered at www.candyjarbooks.co.uk