Candy Jar author Terry Cooper has been asked to co-present a documentary set in for a Canadian TV production company.

As a founder member of the hugely popular ‘Save The Lars Homestead’ restoration campaign, which completed work on the iconic domed set piece from the Star Wars movies in May, Terry thought his days of trekking across the North African deserts were over.

But just like his robotic hero C-3PO, Terry is off once more to share his knowledge of the film locations. Handy, as he is currently assembling his own C-3PO costume for fundraising events.

In a month of new and exciting Star Wars news, it seems that Terry is fast becoming the ‘go-to guy’ for advice and opinion on all things geeky!

Canadian production company Kensington TV are behind the hugely successful ‘MUSEUM SECRETS’ series of educational documentaries, now in their third series. They called Terry up at the last minute, as his Save Lars colleague, Mark Cox from , had to pull out because of circumstances beyond his control.

So Terry is all packed and ready to fly from London’s Heathrow Airport on Friday 16th November, for a whirlwind trip to see how the Homestead is standing up to the conditions. He’ll also visit the Hotel Sidi Driss, a subterranean hotel dug into the ground, which is seen in Star Wars as the home of Luke Skywalker and his uncle and aunt.

Terry, who is currently in the process of writing the third and final book in the KANGAZANG! trilogy, says he was reluctant to go at first, but his inner geek took over:

"Back in May, both Mark and I were struck down with a rather nasty bacterial stomach bug, which was incredibly painful and took a couple of weeks to get over, so I wasn’t planning on going back to Tunisia any time soon. But I got the email from the documentary team and suddenly felt that familiar excitement for the place. The Hotel Sidi Driss is my favourite place in the world – as soon as you get there, you feel like you’ve stepped through the cinema screen and into Episode Four, A .”

MUSEUM SECRETS will call on Terry’s knowledge of the locations and the historical stories surrounding director George Lucas’s choice of filming his space saga there. They’ve also asked him to employ his artistic talents to produce a drawing of one of the locations which will be featured in the documentary. 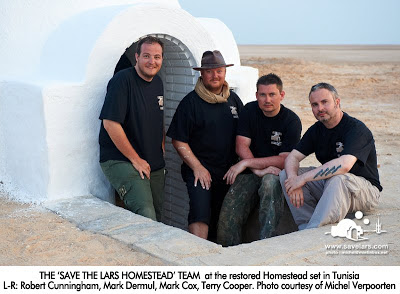 We’ll be back soon with a new report on how the trip went and more information on how you can catch the documentary when it’s completed. May The Force Be With you!
Posted by Candy Jar Films at 16:38