"...let’s talk about Kangazang. Written by Terry Cooper and published by indy Candy Jar, Kangazang is a simple story of one man’s journey to the stars. Published in 2010, it has garnered a sizable number of fans including one Colin Baker, who narrates the audiobook version here. 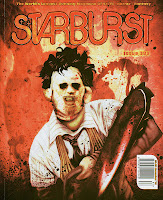 Now, Kangazang is necessarily going to be compared with The Hitchhikers’ Guide to the Galaxy because it shares, at least in its early chapters, a great deal with the latter. A humorous SF tale of a human (pretty cordially) kidnapped from the Earth by a zany alien and taken to see the universe, during which he gets given a quest to find something pretty fundamental, there are obvious comparisons to be made.
And, to be fair, it may suffer in those comparisons. The humour is more down-to-Earth, if you’ll forgive the pun, than in Hitchhiker’s; less sophisticated and less, frankly, downright clever. But that’s not actually a criticism. The humour quotient is still very high, sometimes causing out-loud laughter – reveal of the meaning of the phrase ‘universal remote’ being one such.

And the writing... well, it’s better than Adams. There, I’ve said it – no, don’t go, hear me out. Honestly, if you read the novelisation of Hitchiker’s – the first one, the one culled from the radio series – it’s really not brilliantly written. Structure is clumsy, loads of exposition. It’s full of bloody brilliant ideas, sure – Adams was clearly a genius. Just, a genius who’d obviously never written a novel before. (Mind you, true to genius form, he’d got stuffing good at it only a couple of novels later.)

Kangazang, on the other hand, is written by someone who does know how to write – and that’s the difference. The narrative journey works well. Nothing jars. And the story is a good one. So the actual writing – more importantly, the listening – is a joy.

Add Mr Baker narrating, and an interesting style that adds sound effects and second voices to what would often be made as a single-voice reading, and the audiobook is a very entertaining listen. Well worth a punt."