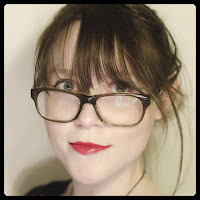 Meet TANIA VINCENT, and find out how she came up with the title ‘Marshmallow Penguin’ that ended up as the name of the eponymous spacecraft in the Kangazang books…
Tania Vincent is ‘a self confessed geek’ and computer animator from Wales, currently living in London. She is also a writer for Skwigly online animation magazine and describes herself as ‘slightly addicted to the cinema’.

What’s your connection to Terry?

I met Terry while studying for my animation degree in . Terry was famous on our course for his fantastic impressions so I introduced myself (mainly to get a photo taken with him as I’m sure he is going to be famous one day) and the rest is history.

How did you first find out about Kangazang?

I’m lucky enough to have been given a preview of Kangazang while Terry was writing the book. I have the honour of getting a mention in the book. I am the original ‘Marshmallow Penguin’. Although I am not a space ship made of hair, I penned the name ‘marshmallow penguin’ when I was younger - I was a big fan of ‘Button Moon’ (ITV preschool children’s programme 1980-1988) when I was little. One of my favourite episodes was when the postman delivered a family of penguins made of marshmallow. It became a pet name as a child and it just stuck. Unfortunately the VHS tape I had with this episode on it has been watched so many times it no longer works. Terry saw me use the name one day on my animations and asked if he could use it in his books. I was more than happy to help.

If you’d like to witness the genius of ‘Button Moon’ for yourself…
Button Moon: ‘A Hole In Blanket Sky’ Series 5,episode 1 (7th January 1986) http://www.youtube.com/watch?v=GnbrXEcBZKQ

What kinds of books/TV/movies do you usually go for?

I am a bit of a movie/TV buff. Anything by ‘HBO’ normally grabs my attention. Homeland has recently taken over my evenings but ‘Curb Your Enthusiasm’, ‘Community’ and ‘30 Rock’ are probably the things I recommend the most to my friends and family. As genres go I am a huge Sci-Fi fan so Kangazang is right up my street. I love anything Douglas Adams, Isaac Asimov or Phillip K. Dick. Their short stories get your imagination working far beyond the story itself.

What are your thoughts about the Kangazang! books?

The books are fantastic. Terry has created a world that is charming and humorous. The characters are recognisable and you warm to them instantly. I am a huge fan of humourous Sci-Fi and this is easily up there with the best of them. I can’t wait for the third instalment.

If Kangazang was being made into a television show or movie, who would you like to see in the cast?

The way Terry has written the characters instantly makes them seem familiar. I would love to see Bill Bailey as Ray. Only Bill could portray such a brilliantly scatty man. I have to admit I can quite easily imagine this as a TV show so I have loads of people I’d love to see star in it. Richard Ayoade (from I.T crowd) would be great as Overlord Kelvin. If you could squeeze Alan Rickman in there somewhere too, I’d be happy.

As it’s a proposed trilogy, what kind of ending would you like to see — happy, sad, open or a final end?

I’d definitely like to see a happy but open ending. The galaxy is large after all.

Have you heard the Audio book version of Kangazang?

Colin Baker’s reading of Kangazang makes for fantastic listening when driving on long trips. It has kept my cousin, who is a huge Dr Who fan, enthralled for hours. We may have listened to it a few too many times.

Have you ever written a book or story? If you could, what would you write about?

I love to write. I write mainly as a hobby, so I carry a notebook around and jot down any idea that comes to me. I would love to write children’s books one day as well as comedy scripts. I have lots of ideas, but I just need to organise them all and get them out into the world.
Posted by Candy Jar Films at 16:20