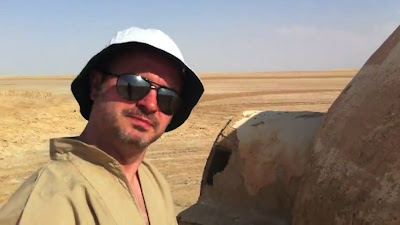 Cardiff-based author and Star Wars fan Terry Cooper is currently in Tunisia fulfilling a long held dream: to restore the Lars homestead – home of Luke Skywalker – to its former glory.

Terry feels that this iconic building should be protected. He said: “I have always been a fan of Star Wars and science fiction. I last visited the sets in Tunisia in 2009 and just being around such an iconic location made a real impact on me as a writer. It was sad to see it falling into disrepair, and it occurred to me that such an inspirational location needed to be preserved for the next generation of writers or film directors.”

The inspiration of Star Wars has certainly helped Terry become a success. His first book, Kangazang!: Remote Possibilities became a cult hit with Doctor Who fans after former Doctor Who, Colin Baker recorded an audio version. His second book, Kangazang!: Star Stuff is due to be released soon. Terry continued: “Fans of sci-fi will enjoy reading my books. It has been fun referencing Star Wars, Hitch-hikers Guide to the Galaxy, Doctor Who and even Kylie Minogue.”

The international ‘Save the Lars Homestead’ team led by Mark Dermul will not be preserving the original homestead as featured in Stars Wars: A New Hope – that was lost to the sand many years ago. Instead they will be fixing the one built for Stars Wars: Attack of the Clones. Like the original from 1977, this has also been left to decay, but the fans are determined it will be returned to its former glory before the desert claims it. Marc said: “Sadly we can’t use the force to get the job done. It’s going to be long hard work but I’m sure it will be worth it in the end.”

The team flew out to Tunisia on the 35th anniversary of Star Wars: A New Hope and will return early next week.

You can find out more about Kangazang! here.