KANGAZANG! BOUNCES INTO SPRING WITH A FANTASTIC SALE! 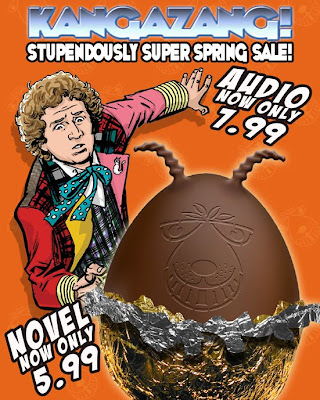 Colin Baker narrates the story about Earthling Jeff Spooner and his alien barber, Ray Scump, as they search for the fabled Universal Remote Control – avoiding danger, doom and embarrassing situations as they go. Aided by two badly programmed robots and an army of warrior Space Hoppers, our heroes dive and try to dodge the biggest threats in the galaxy: Supreme Overlord Kelvin (Emperor of Skragg), the terminally depressed Emo people and Queen Shelley (a bald, cannibalistic Amazon who has a score to settle from way back)...

Actress Claire Cage, who also features in Kangazang!, can be seen this week in Submarine – the highly anticipated movie from The IT Crowd’s, Richard Ayoade.

Kangazang! – a triple CD disc set, with a bonus DVD – was actually produced in the same building where the Doctor Who episode Blink, and the new series of Torchwood, was filmed.

Shaun Russell, director of Candy Jar Books, is excited that Kangazang! will reach more listeners. He said: “We’ve had fantastic reaction to both the book and CD. However, at Candy Jar we are focusing on new projects including a wartime memoir and children’s book. It is now time to clear the decks, so if you have not purchased the CD yet this maybe your last opportunity to do so. We also have a handful of Mike Collins prints to give away.”

For every Kangazang CD or book sold online, we will give a £1 donation to the Atlantic Dash team. They will be rowing the Atlantic for three months later this year, raising money for three worthwhile causes: Help for Heroes, Breast Cancer Care and The Fire Fighters Charity.

Don't delay - get your copy of Kangazang! here.