RUN PHILIPPA RUN! HOW LOSING HER MP3 PLAYER MADE HER BECOME AN AUTHOR! 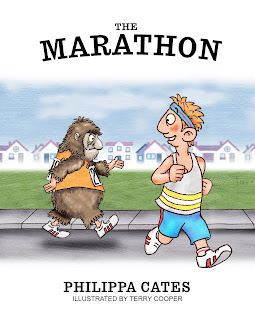 Since the London Marathon started in 1981, thousands of competitors have taken part. Going for a run is as much about your mind forcing your body out the door as it is about physical fitness. Overcoming these psychological barriers can make a difference between finishing the event or not.


Philippa Cates is no stranger to the mental and physical challenges of running, and has written a book about this wonderfully exhausting pastime. The Marathon celebrates this fantastic achievement, but also highlights in a comedic way the potential pitfalls of taking part.
Philippa feels that runners can become very single-minded during their training, even turning down social events because "I've got a long run in the morning." But sometimes temptation can get in the way. She says: “A couple of years ago, I was given one of the comedy grown-up I-Spy books and I thought that I could apply this humour to marathon running. So, while I was training for the Virgin London Marathon in 2017, and struggling to keep myself going, I thought: what if a runner was presented with a number of temptations along the way. How would they overcome them?”
Philippa was emboldened to continue when she misplaced her MP3 player. She continues: “I was bereft! Often music can be a lifeline to a marathon runner, so for a while I felt like a boat without a paddle, and then I realised that the silence was a golden opportunity. That's when I started drafting The Marathon in my head."
The Marathon is a cheeky, but family-friendly satirical short rhyming story accompanied by playful illustrations from the hugely talented artist come Jack Sparrow impersonator, Terry Cooper. The story follows our hero, Runner, as he takes on the gruelling business of training for and running a marathon. Not a natural athlete, and with a weakness for cake and socialising, Runner faces many distractions along the way. But will he complete his challenge?
The book has been endorsed by Leanne Davies, founder of Run Mummy Run. She says: "This book is great fun! It is what training for a marathon is really like. The Marathon strikes a chord with the Run Mummy Run community."
Echoing the spirit of some of the most popular twenty-first century children’s picture books, this satirical spoof book is a clever hybrid between adult and children's book, and you don't need to be a runner to enjoy it. It’s a fun book for all the family with a slight anarchic twist.
The Marathon is available to purchase now at https://philippa-cates.my-online.store/ or via Philippa's website at www.philippacates.com.