Candy Jar Books is pleased to announce the release of God Bless Hooky Street, a comprehensive companion to the beloved TV series Only Fools and Horses.


Only Fools and Horses is a national institution. From ‘Don’t be a plonker!’ to Del Boy falling through the bar, the rickety Reliant Regal to the smashing chandelier, its characters, storylines and sayings have entered the national culture in a way few sitcoms can claim. For good reason was it voted Britain’s favourite comedy in 2004, and the four Christmas specials and two spin offs that have followed in the years since its main series concluded are testament to its enduring popularity.
Next up is the West End, with a musical due in 2019. 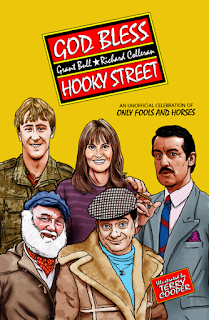 So, almost forty years after it first appeared on screen, it seems that there’s still life in the old dog yet. But what’s behind the show’s longevity? Just why is it such a classic? For the good of the British public, two men have taken it upon themselves to answer these questions, to return through the archives and pick apart this iconic show, episode by episode, special by special. It's a tough job, but somebody had to do it. And going the extra mile, and truly entering into the spirit of the series, they have decided to tackle this most nightmarish of tasks in that other great British institution – the pub! The premise is simple: discuss the show in minute, fan-boy detail, in a different pub for every series and special. These discussions are transcribed verbatim, capturing the easy flow of their conversation as they do what they do best — drink and discuss all things New York, Paris and Peckham.


But who are these mysterious men? None other than Grant Bull and Richard Colleran, a pair of ordinary blokes who’ve been fans of the show since day one. In witty, irreverent repartee, they cover the series from 1981 to its final special in 2003, discussing the hilarious pratfalls, poignant moments, and all the trivia and special touches that make the series so beloved.

As Grant says: “I’ve watched enough Only Fools and Horses to write a thesis; Richard has too. But we didn’t think an essay format would suit the feel of the show. A lot of its appeal resides in Rodney and Del Boy’s banter. Everyone’s local has a Del, someone with the chat, the charm, the dreams and the schemes. The pub helped us keep things snappy, chatty, sometimes a little bit sozzled, but most of all sincere.’ 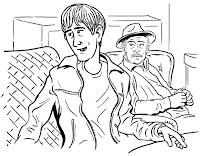 Richard adds: “This book has been three years in the making. Three years of us sitting down together and watching all sixty-four episodes of both our, and most might say, the nation’s favourite television show. Three years of analysing every minute detail, and discussing every thought we’ve ever had about the show. We would talk about how we related to the characters, we would quote the scenes we loved, we would dissect how the show changed from a political observation on Britain in the 1980s  to a ‘scam of the week’ sitcom to almost a comedy drama, but there was something else we recognised when we would talk about it. Unlike some other shows, we realised that this was a show we enjoyed watching with our families, both now and when we were children.”