Today is the day where Queen Elizabeth II becomes not only the longest reigning monarch in British history, but the first to reach the age of 90. Massive congratulations are in order!

Lovely author and passionate Royal-watcher Colin Edwards has been making the headlines too this week, and even made a television appearance in BBC documentary "The Day I Met the Queen" lead by Aled Jones, in the run up to the historic event of Queen Elizabeth II's 90th birthday today!


Over the past thirty years, Colin has met the Queen hundreds of times and has taken over six thousand of snaps of her. Colin is a familiar face to many members of the Royal Family, and was always referred to by name by Princess Diana - "Boys, come and meet my friend Colin!"

Colin says: “You’ve got to have a lot of stamina and be prepared to wait for hours sometimes, standing behind the barriers at the front. The Queen has obviously got to know me very well now, and she will come over and have a few words.”

From these warm interactions, Colin has collected an impressive touching and honest portfolio of photographs, capturing a more personal and natural side to the Royal Family, displayed in his book published in 2014, A Personal Portrait of the Royal Family.

Colin continues: “My photographs are different because, unlike the paparazzi and professionally taken photographs, these were taken for my own pleasure. Yes I am an amateur, but my photographs benefit from that, they capture Her Majesty’s informality”

In celebration of the historic 90th birthday, Colin is hosting a fortnight-long photography exhibition in his home town of Ruthin in North Wales, where he's displaying previously unseen photographs of Queen Elizabeth.

He also was interviewed by Aled Jones in a BBC five-part documentary “The Day I Met the Queen” which started on April 18th, and he has written a poem for the Queen which he sent to Windsor Castle as a birthday present, as is his tradition. Colin's photograph exhibition marking the Diamond Jubilee in 2000 was even attended by the Queen Mother herself (albeit with a few bodyguards as +1s)

“The Queen Mother attended my exhibition to celebrate the Diamond Jubilee accompanied by several bodyguards. She stayed admiring my photographs for nearly an hour, and she even signed my guest book. I think that, after all my interactions with her and her family over the years, it was her way of saying ‘thank you’. That was probably the highlight of my life.” 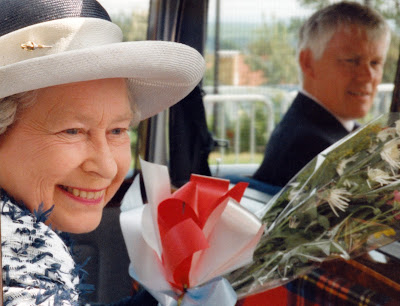 Candy Jar wishes a Happy 90th Birthday to Her Majesty Queen Elizabeth II, and many more!

A Personal Portrait of the Royal Family is a Candy Jar Books publication, and is available to purchase now directly from Candy Jar and to order from at all good retailers.

A Personal Portrait of the Royal Family

A familiar face at royal events, Colin Edwards, has collated his vast collection of photographs of the Royal Family to create a new book. Featuring never-before-seen images of Her Majesty The Queen, The Queen Mother and Diana, Princess of Wales a public events, the author also provides emotive, personal accounts of his meetings with the Royals.