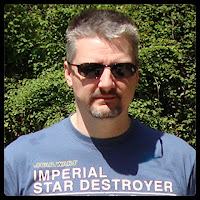 Meet YOSS NUTT, IT slave and general Sci-Fi fan with a mild fetish for tattoos...

What’s your connection to Terry?

I first met Terry whilst working in Cardiff. He quickly stood out as one of the most interesting people to chat with during those oasis moments of quiet in the office. His sense of humour and fondness for Sci-Fi notched him up as a kindred spirit.

How did you first find out about Kangazang?

I was honoured to be included in the few given a sneak preview and knew I had to have a copy of the full version before I finished reading the preview.

Did you read the book, and what were your thoughts?

I have read both versions of the first book and the second book. I thoroughly enjoyed the style and the content, Terry has managed to encapsulate many facets of the childhoods of people ‘our’ age and interwoven it with a light hearted but compelling story and characters I came to care about. If I were to make a tick sheet for things to recommend a book for, Kangazang manages to tick all boxes other than the one for a long story arc over many books. But with number three in the ether that will hopefully be fulfilled at some point.

What kinds of books/TV/movies do you usually go for?

Sci-Fi or Fantasy or Horror are my usual genres, either serious or humorous. My reading tends to be mostly Sci-Fi with the most recent books being from Isaac Asimov, Harry Harrison, Philip Jose Farmer, Fred Saberhagen, Orson Scott Card and Stephen King. For TV or Film, it is anything by Joss Whedon in both categories, True Blood, The Walking Dead, Battlestar Galactica. I can’t fail to mention a little saga by the name of Star Wars.

If you could cast some of the characters in a movie version, who would you pick?

I find it hard to fault Terry’s ideal cast, but if I had to recast the only sure fire actors for me would be Rosie Marcel as Shelly, Marshall Lancaster as Kelvin, Alan Rickman as Lord Rancydd and  Martin Freeman as Jeff,

As it’s a proposed trilogy, what kind of ending would you like to see - happy, sad, open or a final end?

I would like it to be a completion of the story arc in progress, but if any potential tangential stories were hinted at I would be quite happy.

Have you heard any of the Audiobook?

I have the audiobook and it is a mighty fine experience. I had read the book a few times before listening to the audiobook so I had already made up my mind how the characters sound, but the voice work is fantastic.

Have you ever written a book or story? If you could, what would you write about?

I have difficulty finishing writing my name, so no story writing from me.