FROM THE MOUTHS OF BABES 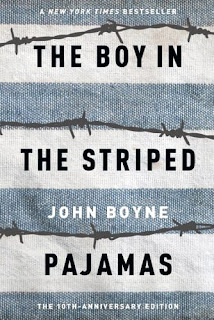 Wow. That’s a brave opening even for me and yet a nine year-old boy had no trouble at all in uttering this phrase. Why? Well, put simply, he had been brought up to believe that such a phrase and the salute which accompanies it was actually polite. The boy in question is young Bruno from a fantastic novel which I have only just got around to reading John Boyne’s The Boy In The Striped Pyjamas and, at the time of me writing this, the film was showing on Netflix as well. While the film has received praise from all quarters we are of course here to discuss literature… and the book is far better anyway. What did intrigue me about this book were the various techniques used to display childhood innocence, which is the topic of today's blog.

Having worked with children for a number of years as well as having a child of my own I am forever amazed by the way that they see the world before they are influenced and, just like in this book, it would put many of us to shame. As we have seen from the example already provided, imitation is one way that children try to learn new things and fit in with their peers or seek approval from their guardians. This places a huge responsibility on the person(s) guiding these young minds, but unfortunately this can lead to the transferal of bad habits as well as good habits.

If we look at the extract above, Bruno does not actually commit to whether he would prefer the Star of David or a swastika on his armband. The simple reason for this is because the influences upon this decision are equally great. It would be an assumption to guess which one he would choose but it is safe to say that he is probably drawn to both due to the fondness for the two people who wear them. Choosing one would mean risking disappointing the other party.
Before Bruno, or any child, commits to a decision he may decide to ask questions first:

‘Can I ask you something?’ he added after a moment.
‘Yes,’ said Shmuel.
Bruno thought about it. He wanted to phrase the question just right.
‘Why are there so many people on that side of the fence?’ he asked. ‘And what are you all doing there?’ (2007, 115).

There are many other reasons why children ask questions (and don’t stop) but that is to satisfy their quest for knowledge about a particular subject and to enhance their understanding of the world around them. As a reader, we see through Bruno’s eyes as he looks through his bedroom window catching his first glimpse of the concentration camp. An education in history and our own understanding of the world means that we immediately comprehend the environment in which he now inhabits and the one which he observes, but we are in a unique position compared to the young narrator. The world in which he has been brought up in means that he has no concept of segregation and children simply while away the hours playing games together. The fence itself is alien to him as are the striped pyjamas and many other differences he is discovering between himself and Shmuel, highlighted even more so by the fact that they share the same birthday which, to Bruno, means they are almost identical.

One of the reasons for this lack of comprehension is because children are often sheltered from the truth. This is usually done to protect them from the corruption and harsh reality of the world while coupled with a belief that children are incapable of processing the truth; in light of the topic we are discussing it may well be that children may have been able to highlight just how absurd and inhumane the displayed behaviours actually were. Boyne recognises this and plays on this, this is seen in one instance when Bruno decides to keep Shmuel a secret from his family: ‘Bruno was of the opinion that when it came to parents, and especially when it came to sisters, what they didn’t know couldn’t hurt them’ (2007, 132).

Boyne also plays with the children’s lack of comprehension in terms of the language that they employ. Both Bruno and Gretel refer to Auschwitz as ‘Out-with’ and the Fuhrer as ‘The Fury’. As young children learn language they often go through a stage of word replacement for anything they can’t quite pronounce but these examples bring remarkable connotations with them; 'Out-with' could easily be read as comparable to the Nazi’s attempt at culling those of the Jewish faith (amongst others) while ‘The Fury’ brings to mind words such as ‘rage’ or ‘anger’ rather than the literal translation of ‘leader’.

In addition to making sense of language, children make sense of their surroundings by supposing upon what is going on around them. This is not unique to children and examples can be found in literature of ancient civilisations attempting to seek meaning and reason in the events of nature. In The Epic of Gilgamesh and Homer’s Odyssey there are a number of narratives which explain the world around them as acts of the Gods, the Romans and Pagans also sought to rationale their environment by relating events to acts of deities. There are further examples to be found in modern society and literature as scientists seek to discover, evidence and explain anything which remains a mystery while writers, such as Mary Shelley, play on scientific discovery through their writing, and in Shelley's case her most famous novel: Frankenstein.

In attempting to explain away Shmuel’s father’s absence, Bruno says: ‘I imagine the men were taken to work in another town and they have to stay there for a few days until the work is done. And the post isn’t very good here anyway. I expect he’ll turn up one day soon’ (2007, 195). This response between adults would be seen as a mature response to make the other person feel better or, at best, blind optimism, but this example – viewed through Bruno’s eyes  – is a genuine rationalisation of the circumstances presented.

If you are in any doubt as to the differences between an innocent narrative compared to a world-weary response then look no further than the following example. This extract is taken from Martin Amis’ The Zone of Interest and occurs when a solider describes a truck-load of bodies being ferried past a new set of prisoners when, unfortunately, some parts become visible:


'He said that about half a dozen of them half flopped out over the railboard; he said that it made him imagine a crew of ghosts being sick over a ship’s side. With their arms swinging. Not just any old corpses either. Starveling corpses. Covered in shit, and filth, and rags, and gore, and wounds, and boils. Smashed-up, forty-kilo corpses’ (2015, 37).

It doesn’t leave much to the imagination does it? Yet no-one questions it. Who were those people? Why are they dead? What will happen to them now? Are they dead? Will they go to hospital? The prisoners who witnessed this certainly knew what this scene meant for them which is why panic ensued.

The reason I have brought up this topic is to highlight that innocence is an equally powerful way of highlighting ignorance and horror. The graphic depiction above is most certainly effective but I would like you to consider the stories you are writing once more and consider these questions:


These are all important things to think about, but I would suggest re-writing one scene from a short story or novel that you’ve produced through the eyes of someone slightly removed from the social sphere, level of intelligence or rank of the setting or characters in which it is taking place. Otherwise, simply read The Boy In The Striped Pyjamas and see if that inspires you.

Don't forget, we are all trying to make sense of the world around us. Happy writing!