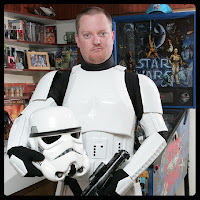 MEET Mark Dermul, possibly the most knowledgeable Star Wars expert in , a whiskey collector and connoisseur, and founder of the immensely successful ‘Save The Lars Homestead’ Campaign (www.savelars.com).  Mark is a Belgian Star Wars fan from the very first time he saw the movie as a 7 year old in 1977. His work is autograph collecting and visiting worldwide Star Wars locations, while his hobby is in banking. Or is that the other way around? He’s not entirely sure…

How do you know Terry?

Terry and I first met in 2003 during my first ‘Trip to Tatooine’, an 8 day journey across the Tunisian landscape to locate the filming locations of our beloved Star Wars Saga. We’ve been friends ever since. Terry returned to with me again in 2010 and finally joined me on our adventure to save the Lars Homestead in 2012.

When did you first hear about Kangazang?

During the 2010 trip, Terry used to read to us from his book, which was simply hilarious. I knew I had to get my hands on it as soon as I got back home.

Did you read the book?  What were your thoughts?

Is this a trick question? Of course I read it! More than once. Not only a funny story in its own right, but I love all the subtle references to other classic sci-fi movies. And Terry does have a way with words. The book has brought a smile to my face many times over.

I kinda like all sort of books, be it both fictional (mostly fantasy, sci-fi and political and espionage thrillers) or non-fiction. As far as movies go, the popular sagas come to mind like Star Wars, Indiana Jones, Alien, Avengers, Lord of the Rings, but once I've had my fill of those, I do occasionally watch other kinds of movies too. Drama, comedy, you name it.

If you could cast some of the characters in a movie version of KANGAZANG!, who would you pick?

Let’s stick with the two leading roles, shall we? Jeff Spooner to be played by Simon Pegg and Ray Scump by Nick Frost. That would make me a happy man. But let’s not forget Terry himself. I find him to be funny and having the looks to play Jeff Spooner himself. This is not lip-service to my friend, mind you. I secretly believe that Terry had himself in mind when he wrote the book. Don’t tell him I said that, though.

How would you like to see the Kangazang trilogy end?

I think a final end would be best, but let’s make sure it’s hilarious, OK?  Shouldn't be too much of a problem for Terry, I suppose.

Have you heard the Kangazang Audiobook?

I have thoroughly enjoyed the audiobook by Colin Baker. But I am more of a reader than a listener myself, I must admit. I prefer to use my own voices (in my head – you know what I mean). That is also why I prefer books to movies, usually.
Have you ever written a book or story? If you could, what would you write about?

I’ve never written a story (well, I did write a few sci-fi shorts called Skyrack, but they were a pet project, nothing more), but I have published a few books about travelling to Tunisia, Norway and Italy’s Star Wars locations. But my talent is nothing compared to that of Terry’s (again, don’t tell him that, or he’ll never get off cloud nine again)!
Posted by Candy Jar Films at 14:44